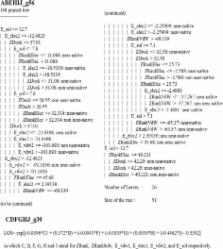 In this study, we established an ensemble computational model for discriminating the near-native docking pose of APKs named “AnkPlex”. A dataset of APKs was generated from seven X-ray APKs, which consisted of 3 internal domains, using the reliable docking tool ZDOCK. The dataset was composed of 669 and 44,334 near-native and non-near-native poses, respectively, and it was used to generate eleven informative features. Subsequently, a re-scoring rank was generated by AnkPlex using a combination of a decision tree algorithm and logistic regression. AnkPlex achieved superior efficiency with ≥1 near-native complexes in the 10 top-rankings for nine X-ray complexes compared to ZDOCK, which only obtained six X-ray complexes. In addition, feature analysis demonstrated that the van der Waals feature was the dominant near-native pose out of the potential ankyrin-protein docking poses.

The AnkPlex model achieved a success at predicting near-native docking poses and led to the discovery of informative characteristics that could further improve our understanding of the ankyrin-protein complex. Our computational study could be useful for predicting the near-native poses of binding proteins and desired targets, especially for ankyrin-protein complexes. The AnkPlex web server is freely accessible at http://ankplex.ams.cmu.ac.th.

Assignment of homology to genome sequences using a library of hidden Markov models that represent all proteins of known structure.

Peter J. Gough,  K Karplus,  Jeffery Hughey … (2001)
Of the sequence comparison methods, profile-based methods perform with greater selectively than those that use pairwise comparisons. Of the profile methods, hidden Markov models (HMMs) are apparently the best. The first part of this paper describes calculations that (i) improve the performance of HMMs and (ii) determine a good procedure for creating HMMs for sequences of proteins of known structure. For a family of related proteins, more homologues are detected using multiple models built from diverse single seed sequences than from one model built from a good alignment of those sequences. A new procedure is described for detecting and correcting those errors that arise at the model-building stage of the procedure. These two improvements greatly increase selectivity and coverage. The second part of the paper describes the construction of a library of HMMs, called SUPERFAMILY, that represent essentially all proteins of known structure. The sequences of the domains in proteins of known structure, that have identities less than 95 %, are used as seeds to build the models. Using the current data, this gives a library with 4894 models. The third part of the paper describes the use of the SUPERFAMILY model library to annotate the sequences of over 50 genomes. The models match twice as many target sequences as are matched by pairwise sequence comparison methods. For each genome, close to half of the sequences are matched in all or in part and, overall, the matches cover 35 % of eukaryotic genomes and 45 % of bacterial genomes. On average roughly 15% of genome sequences are labelled as being hypothetical yet homologous to proteins of known structure. The annotations derived from these matches are available from a public web server at: http://stash.mrc-lmb.cam.ac.uk/SUPERFAMILY. This server also enables users to match their own sequences against the SUPERFAMILY model library. Copyright 2001 Academic Press.

Zhiping Weng,  Rong-Hsing Chen,  Li Li (2003)
The development of scoring functions is of great importance to protein docking. Here we present a new scoring function for the initial stage of unbound docking. It combines our recently developed pairwise shape complementarity with desolvation and electrostatics. We compare this scoring function with three other functions on a large benchmark of 49 nonredundant test cases and show its superior performance, especially for the antibody-antigen category of test cases. For 44 test cases (90% of the benchmark), we can retain at least one near-native structure within the top 2000 predictions at the 6 degrees rotational sampling density, with an average of 52 near-native structures per test case. The remaining five difficult test cases can be explained by a combination of poor binding affinity, large backbone conformational changes, and our algorithm's strong tendency for identifying large concave binding pockets. All four scoring functions have been integrated into our Fast Fourier Transform based docking algorithm ZDOCK, which is freely available to academic users at http://zlab.bu.edu/~ rong/dock. Copyright 2003 Wiley-Liss, Inc.