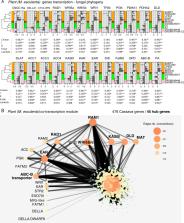 Most land plants form symbioses with arbuscular mycorrhizal fungi (AMF). Diversity of AMF increases plant community productivity and plant diversity. For decades, it was known that plants trade carbohydrates for phosphate with their fungal symbionts. However, recent studies show that plant-derived lipids probably represent the most essential currency of exchange. Understanding the regulation of plant genes involved in the currency of exchange is crucial to understanding stability of this mutualism. Plants encounter many different AMF genotypes that vary greatly in the benefit they confer to plants. Yet the role that fungal genetic variation plays in the regulation of this currency has not received much attention. We used a high-resolution phylogeny of one AMF species ( Rhizophagus irregularis) to show that fungal genetic variation drives the regulation of the plant fatty acid pathway in cassava ( Manihot esculenta); a pathway regulating one of the essential currencies of trade in the symbiosis. The regulation of this pathway was explained by clearly defined patterns of fungal genome-wide variation representing the precise fungal evolutionary history. This represents the first demonstrated link between the genetics of AMF and reprogramming of an essential plant pathway regulating the currency of exchange in the symbiosis. The transcription factor RAM1 was also revealed as the dominant gene in the fatty acid plant gene co-expression network. Our study highlights the crucial role of variation in fungal genomes in the trade of resources in this important symbiosis and also opens the door to discovering characteristics of AMF genomes responsible for interactions between AMF and cassava that will lead to optimal cassava growth.

Simon Blomberg, Anthony Ives, Theodore Garland (2003)
The primary rationale for the use of phylogenetically based statistical methods is that phylogenetic signal, the tendency for related species to resemble each other, is ubiquitous. Whether this assertion is true for a given trait in a given lineage is an empirical question, but general tools for detecting and quantifying phylogenetic signal are inadequately developed. We present new methods for continuous-valued characters that can be implemented with either phylogenetically independent contrasts or generalized least-squares models. First, a simple randomization procedure allows one to test the null hypothesis of no pattern of similarity among relatives. The test demonstrates correct Type I error rate at a nominal alpha = 0.05 and good power (0.8) for simulated datasets with 20 or more species. Second, we derive a descriptive statistic, K, which allows valid comparisons of the amount of phylogenetic signal across traits and trees. Third, we provide two biologically motivated branch-length transformations, one based on the Ornstein-Uhlenbeck (OU) model of stabilizing selection, the other based on a new model in which character evolution can accelerate or decelerate (ACDC) in rate (e.g., as may occur during or after an adaptive radiation). Maximum likelihood estimation of the OU (d) and ACDC (g) parameters can serve as tests for phylogenetic signal because an estimate of d or g near zero implies that a phylogeny with little hierarchical structure (a star) offers a good fit to the data. Transformations that improve the fit of a tree to comparative data will increase power to detect phylogenetic signal and may also be preferable for further comparative analyses, such as of correlated character evolution. Application of the methods to data from the literature revealed that, for trees with 20 or more species, 92% of traits exhibited significant phylogenetic signal (randomization test), including behavioral and ecological ones that are thought to be relatively evolutionarily malleable (e.g., highly adaptive) and/or subject to relatively strong environmental (nongenetic) effects or high levels of measurement error. Irrespective of sample size, most traits (but not body size, on average) showed less signal than expected given the topology, branch lengths, and a Brownian motion model of evolution (i.e., K was less than one), which may be attributed to adaptation and/or measurement error in the broad sense (including errors in estimates of phenotypes, branch lengths, and topology). Analysis of variance of log K for all 121 traits (from 35 trees) indicated that behavioral traits exhibit lower signal than body size, morphological, life-history, or physiological traits. In addition, physiological traits (corrected for body size) showed less signal than did body size itself. For trees with 20 or more species, the estimated OU (25% of traits) and/or ACDC (40%) transformation parameter differed significantly from both zero and unity, indicating that a hierarchical tree with less (or occasionally more) structure than the original better fit the data and so could be preferred for comparative analyses.

Fatty acids in arbuscular mycorrhizal fungi are synthesized by the host plant.

Leonie Luginbuehl, Giles E D Oldroyd, Peter Eastmond … (2017)
Plants form beneficial associations with arbuscular mycorrhizal fungi, which facilitate nutrient acquisition from the soil. In return, the fungi receive organic carbon from the plants. The transcription factor RAM1 (REQUIRED FOR ARBUSCULAR MYCORRHIZATION 1) is crucial for this symbiosis, and we demonstrate that it is required and sufficient for the induction of a lipid biosynthetic pathway that is expressed in plant cells accommodating fungal arbuscules. Lipids are transferred from the plant to mycorrhizal fungi, which are fatty acid auxotrophs, and this lipid export requires the glycerol-3-phosphate acyltransferase RAM2, a direct target of RAM1. Our work shows that in addition to sugars, lipids are a major source of organic carbon delivered to the fungus, and this is necessary for the production of fungal lipids.