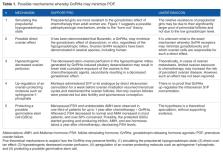 The only clinically accepted method of fertility preservation in young women facing gonadotoxic chemo- and/or radiotherapy for malignant or autoimmune diseases is cryopreservation of embryos or unfertilized ova, whereas cryopreservation of ovarian tissue for future reimplantation, or in vitro maturation of follicles, and the use of gonadotropin-releasing hormone agonists (GnRHa) are still considered investigational, by several authorities. Whereas previous publications have raised the fear of GnRHa’s possible detrimental effects in patients with hormone receptor-positive breast cancers, recent randomized controlled trials (RCTs) have shown that it either improves or does not affect disease-free survival (DFS) in such patients. This review summarizes the pros and cons of GnRHa co-treatment for fertility preservation, suggesting 5 theoretical mechanisms for GnRHa action: (1) simulating the prepubertal hypogonadotropic milieu, (2) direct effect on GnRH receptors, (3) decreased ovarian perfusion, (4) upregulation of an ovarian-protecting molecule such as sphingosine-1-phosphate, and (5) protecting a possible germinative stem cell. We try to explain the reasons for the discrepancy between most publications that support the use of GnRHa for fertility preservation and the minority of publications that did not support its efficiency.

Sarah Spiegel,  Sheldon Milstien (2003)
The evolutionarily conserved actions of the sphingolipid metabolite, sphingosine-1-phosphate (S1P), in yeast, plants and mammals have shown that it has important functions. In higher eukaryotes, S1P is the ligand for a family of five G-protein-coupled receptors. These S1P receptors are differentially expressed, coupled to various G proteins, and regulate angiogenesis, vascular maturation, cardiac development and immunity, and are important for directed cell movement.

Bradley P. Knight,  Claire Glister (2006)
In recent years, exciting progress has been made towards unravelling the complex intraovarian control mechanisms that, in concert with systemic signals, coordinate the recruitment, selection and growth of follicles from the primordial stage through to ovulation and corpus luteum formation. A plethora of growth factors, many belonging to the transforming growth factor-beta (TGF-beta ) superfamily, are expressed by ovarian somatic cells and oocytes in a developmental, stage-related manner and function as intraovarian regulators of folliculogenesis. Two such factors, bone morphogenetic proteins, BMP-4 and BMP-7, are expressed by ovarian stromal cells and/or theca cells and have recently been implicated as positive regulators of the primordial-to-primary follicle transition. In contrast, evidence indicates a negative role for anti-Mullerian hormone (AMH, also known as Mullerian-inhibiting substance) of pre-granulosa/granulosa cell origin in this key event and subsequent progression to the antral stage. Two other TGF-beta superfamily members, growth and differentiation factor-9 (GDF-9) and BMP-15 (also known as GDF-9B) are expressed in an oocyte-specific manner from a very early stage and play key roles in promoting follicle growth beyond the primary stage; mice with null mutations in the gdf-9 gene or ewes with inactivating mutations in gdf-9 or bmp-15 genes are infertile with follicle development arrested at the primary stage. Studies on later stages of follicle development indicate positive roles for granulosa cell-derived activin, BMP-2, -5 and -6, theca cell-derived BMP-2, -4 and -7 and oocyte-derived BMP-6 in promoting granulosa cell proliferation, follicle survival and prevention of premature luteinization and/or atresia. Concomitantly, activin, TGF-beta and several BMPs may exert paracrine actions on theca cells to attenuate LH-dependent androgen production in small to medium-size antral follicles. Dominant follicle selection in monovular species may depend on differential FSH sensitivity amongst a growing cohort of small antral follicles. Changes in intrafollicular activins, GDF-9, AMH and several BMPs may contribute to this selection process by modulating both FSH- and IGF-dependent signalling pathways in granulosa cells. Activin may also play a positive role in oocyte maturation and acquisition of developmental competence. In addition to its endocrine role to suppress FSH secretion, increased output of inhibin by the selected dominant follicle(s) may upregulate LH-induced androgen secretion that is required to sustain a high level of oestradiol secretion during the pre-ovulatory phase. Advances in our understanding of intraovarian regulatory mechanisms should facilitate the development of new approaches for monitoring and manipulating ovarian function and improving fertility in domesticated livestock, endangered species and man.