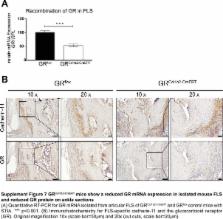 Journal: Annals of the Rheumatic Diseases

Glucocorticoid (GC) therapy is frequently used to treat rheumatoid arthritis due to potent anti-inflammatory actions of GCs. Direct actions of GCs on immune cells were suggested to suppress inflammation.

Define the role of the glucocorticoid receptor (GR) in stromal cells for suppression of inflammatory arthritis.

Fei-hong Ji,  Allison Pettit,  Koichiro Ohmura … (2002)
In spontaneous inflammatory arthritis of K/BxN T cell receptor transgenic mice, the effector phase of the disease is provoked by binding of immunoglobulins (Igs) to joint surfaces. Inflammatory cytokines are known to be involved in human inflammatory arthritis, in particular rheumatoid arthritis, although, overall, the pathogenetic mechanisms of the human affliction remain unclear. To explore the analogy between the K/BxN model and human patients, we assessed the role and relative importance of inflammatory cytokines in K/BxN joint inflammation by transferring arthritogenic serum into a panel of genetically deficient recipients. Interleukin (IL)-1 proved absolutely necessary. Tumor necrosis factor (TNF)–α was also required, although seemingly less critically than IL-1, because a proportion of TNF-α–deficient mice developed robust disease. There was no evidence for an important role for IL-6. Bone destruction and reconstruction were also examined. We found that all mice with strong inflammation exhibited the bone erosion and reconstruction phenomena typical of K/BxN arthritis, with no evidence of any particular requirement for TNFα for bone destruction. The variability in the requirement for TNF-α, reminiscent of that observed in treated rheumatoid arthritis patients, did not appear genetically programmed but related instead to subtle environmental changes.