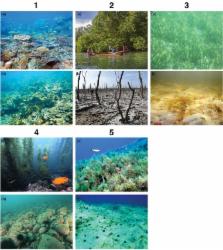 Conservation and environmental management are principal countermeasures to the degradation of marine ecosystems and their services. However, in many cases, current practices are insufficient to reverse ecosystem declines. We suggest that restoration ecology, the science underlying the concepts and tools needed to restore ecosystems, must be recognized as an integral element for marine conservation and environmental management. Marine restoration ecology is a young scientific discipline, often with gaps between its application and the supporting science. Bridging these gaps is essential to using restoration as an effective management tool and reversing the decline of marine ecosystems and their services. Ecological restoration should address objectives that include improved ecosystem services, and it therefore should encompass social–ecological elements rather than focusing solely on ecological parameters. We recommend using existing management frameworks to identify clear restoration targets, to apply quantitative tools for assessment, and to make the re-establishment of ecosystem services a criterion for success.

Accelerating loss of seagrasses across the globe threatens coastal ecosystems.

M Waycott,  C. M. Duarte,  T. J. B. Carruthers … (2009)
Coastal ecosystems and the services they provide are adversely affected by a wide variety of human activities. In particular, seagrass meadows are negatively affected by impacts accruing from the billion or more people who live within 50 km of them. Seagrass meadows provide important ecosystem services, including an estimated $1.9 trillion per year in the form of nutrient cycling; an order of magnitude enhancement of coral reef fish productivity; a habitat for thousands of fish, bird, and invertebrate species; and a major food source for endangered dugong, manatee, and green turtle. Although individual impacts from coastal development, degraded water quality, and climate change have been documented, there has been no quantitative global assessment of seagrass loss until now. Our comprehensive global assessment of 215 studies found that seagrasses have been disappearing at a rate of 110 km(2) yr(-1) since 1980 and that 29% of the known areal extent has disappeared since seagrass areas were initially recorded in 1879. Furthermore, rates of decline have accelerated from a median of 0.9% yr(-1) before 1940 to 7% yr(-1) since 1990. Seagrass loss rates are comparable to those reported for mangroves, coral reefs, and tropical rainforests and place seagrass meadows among the most threatened ecosystems on earth.

Carl Folke,  Johan Rockström,  W Adger … (2005)
Social and ecological vulnerability to disasters and outcomes of any particular extreme event are influenced by buildup or erosion of resilience both before and after disasters occur. Resilient social-ecological systems incorporate diverse mechanisms for living with, and learning from, change and unexpected shocks. Disaster management requires multilevel governance systems that can enhance the capacity to cope with uncertainty and surprise by mobilizing diverse sources of resilience.

Landscape effects on crop pollination services: are there general patterns?

Anne Bogdanski,  Sarah Greenleaf,  Barbara Herren … (2008)
Pollination by bees and other animals increases the size, quality, or stability of harvests for 70% of leading global crops. Because native species pollinate many of these crops effectively, conserving habitats for wild pollinators within agricultural landscapes can help maintain pollination services. Using hierarchical Bayesian techniques, we synthesize the results of 23 studies - representing 16 crops on five continents - to estimate the general relationship between pollination services and distance from natural or semi-natural habitats. We find strong exponential declines in both pollinator richness and native visitation rate. Visitation rate declines more steeply, dropping to half of its maximum at 0.6 km from natural habitat, compared to 1.5 km for richness. Evidence of general decline in fruit and seed set - variables that directly affect yields - is less clear. Visitation rate drops more steeply in tropical compared with temperate regions, and slightly more steeply for social compared with solitary bees. Tropical crops pollinated primarily by social bees may therefore be most susceptible to pollination failure from habitat loss. Quantifying these general relationships can help predict consequences of land use change on pollinator communities and crop productivity, and can inform landscape conservation efforts that balance the needs of native species and people.

This is an Open Access article distributed under the terms of the Creative Commons Attribution Non-Commercial License ( http://creativecommons.org/licenses/by-nc/4.0/), which permits non-commercial re-use, distribution, and reproduction in any medium, provided the original work is properly cited. For commercial re-use, please contact journals.permissions@ 123456oup.com .