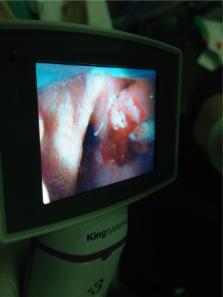 Arash Afshari,  Ida Thøgersen,  Charlotte Rosenstock … (2012)
Awake flexible fiberoptic intubation (FFI) is the gold standard for management of anticipated difficult tracheal intubation. The purpose of this study was to compare awake FFI to awake McGrath® video laryngoscope, (MVL), (Aircraft Medical, Edinburgh, Scotland, United Kingdom) intubation in patients with an anticipated difficult intubation. The authors examined the hypothesis that MVL intubation would be faster than FFI. Ninety-three adult patients with anticipated difficult intubation were randomly allocated to awake FFI or awake MVL, patients were given glycopyrrolate, nasal oxygen, topical lidocaine orally, and a transtracheal injection of 100 mg lidocaine. Remifentanil infusion was administered intravenously to a Ramsay sedation score of 2-4. Time to tracheal intubation was recorded by independent assessors. The authors also recorded intubation success on the first attempt, investigators' evaluation of ease of the technique, and patients reported intubation-discomfort evaluated on a visual analog scale. Eighty-four patients were eligible for analysis. Time to tracheal intubation was median [interquartile range, IQR] 80 s [IQR 58-117] with FFI and 62 s [IQR 55-109] with MVL (P = 0.17). Intubation success on the first attempt was 79% versus 71% for FFI and MVL, respectively. The median visual analog scale score for ease of intubation was 2 (IQR 1-4) versus 1 (IQR 1-6) for FFI and MVL, respectively. The median visual analog scale score for patients' assessment of discomfort for both techniques was 2, FFI (IQR 0-3), MVL (IQR 0-4). The authors found no difference in time to tracheal intubation between awake FFI and awake MVL intubation performed by experienced anesthesiologists in patients with anticipated difficult airway.

M. Rai,  Christopher M. Parry,  Margaret L. Warner … (2007)
Awake fibreoptic intubation (AFOI) is a technique used in patients with difficult airways. This study compares the suitability of remifentanil target-controlled infusion (TCI) to propofol TCI for conscious sedation during AFOI in patients with bona fide difficult airways. We recruited 24, ASA I-III patients, who were undergoing sedation for elective AFOI. Patients were randomized to one of the two groups, Group P (n=10) received propofol TCI and Group R (n=14) received remifentanil TCI. Primary outcome measures were conditions achieved at endoscopy, intubation, and post-intubation, which were graded using scoring systems. Other parameters measured were the endoscopy time, intubation time, and number of attempts at intubation. A postoperative interview was conducted to determine recall of events and level of patient satisfaction. Endoscopy scores (0-5) and intubation scores (0-5) were significantly different [Group P 3 (1-4) vs Group R 1 (0-3) P<0.0001, Group P 3 (2-4) vs Group R 1 (0-3) P<0.0001, respectively]; with much better conditions in Group R, endoscopy times and intubation times were also significantly different, being shorter in Group R (P<0.007 and P<0.023, respectively). Patient tolerance of the procedure, judged by the discomfort scores (P<0.004) and the post-intubation scores (P<0.08), was significantly better in Group R. The level of recall for events was higher in Group R. However, there were no significant differences in the patient satisfaction scores. Remifentanil TCI appears to provide better conditions for AFOI when compared with propofol TCI. The disadvantage of remifentanil in this setting may be a higher incidence of recall.

K. Dimitriou,  I D Zogogiannis,  D Liotiri (2009)
The Airtraq laryngoscope (AL) is a new single use indirect laryngoscope designed to facilitate tracheal intubation in anaesthetised patients either with normal or difficult airway anatomy. It is designed to provide a view of the glottis without alignment of the oral, pharyngeal and tracheal axes. We report four cases of successful awake tracheal intubation using the AL. The first case is a patient with severe ankylosing spondylitis and the other three cases with anticipated difficult airway. An awake intubation under sedation and topical airway anaesthesia was chosen. We consider that the AL can be used effectively to accomplish an awake intubation in patients with a suspected or known difficult airway and may be a useful alternative where other methods for awake intubation have failed or are not available.