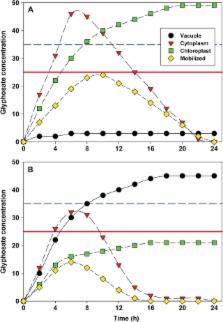 Authors: Robert Douglas Sammons a , * , Todd A Gaines b

Studies of mechanisms of resistance to glyphosate have increased current understanding of herbicide resistance mechanisms. Thus far, single-codon non-synonymous mutations of EPSPS (5-enolypyruvylshikimate-3-phosphate synthase) have been rare and, relative to other herbicide mode of action target-site mutations, unconventionally weak in magnitude for resistance to glyphosate. However, it is possible that weeds will emerge with non-synonymous mutations of two codons of EPSPS to produce an enzyme endowing greater resistance to glyphosate. Today, target-gene duplication is a common glyphosate resistance mechanism and could become a fundamental process for developing any resistance trait. Based on competition and substrate selectivity studies in several species, rapid vacuole sequestration of glyphosate occurs via a transporter mechanism. Conversely, as the chloroplast requires transporters for uptake of important metabolites, transporters associated with the two plastid membranes may separately, or together, successfully block glyphosate delivery. A model based on finite glyphosate dose and limiting time required for chloroplast loading sets the stage for understanding how uniquely different mechanisms can contribute to overall glyphosate resistance.

Evolution by gene duplication: an update

The evolution of gene duplications: classifying and distinguishing between models.

D Weinreich,  D Hartl,  Nigel Delaney … (2006)
Five point mutations in a particular beta-lactamase allele jointly increase bacterial resistance to a clinically important antibiotic by a factor of approximately 100,000. In principle, evolution to this high-resistance beta-lactamase might follow any of the 120 mutational trajectories linking these alleles. However, we demonstrate that 102 trajectories are inaccessible to Darwinian selection and that many of the remaining trajectories have negligible probabilities of realization, because four of these five mutations fail to increase drug resistance in some combinations. Pervasive biophysical pleiotropy within the beta-lactamase seems to be responsible, and because such pleiotropy appears to be a general property of missense mutations, we conclude that much protein evolution will be similarly constrained. This implies that the protein tape of life may be largely reproducible and even predictable.

This is an open access article under the terms of the Creative Commons Attribution-NonCommercial-NoDerivs 4.0 License, which permits use and distribution in any medium, provided the original work is properly cited, the use is non-commercial and no modifications or adaptations are made.