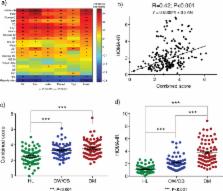 Recent studies revealed strong evidence that branched-chain and aromatic amino acids (BCAAs and AAAs) are closely associated with the risk of developing type 2 diabetes in several Western countries. The aim of this study was to evaluate the potential role of BCAAs and AAAs in predicting the diabetes development in Chinese populations. The serum levels of valine, leucine, isoleucine, tyrosine, and phenylalanine were measured in a longitudinal and a cross sectional studies with a total of 429 Chinese participants at different stages of diabetes development, using an ultra-performance liquid chromatography triple quadruple mass spectrometry platform. The alterations of the five AAs in Chinese populations are well in accordance with previous reports. Early elevation of the five AAs and their combined score was closely associated with future development of diabetes, suggesting an important role of these metabolites as early markers of diabetes. On the other hand, the five AAs were not as good as existing clinical markers in differentiating diabetic patients from their healthy counterparts. Our findings verified the close correlation of BCAAs and AAAs with insulin resistance and future development of diabetes in Chinese populations and highlighted the predictive value of these markers for future development of diabetes.

Metabolite profiles and the risk of developing diabetes.

Elizabeth McCabe,  Jianmin Wang,  Joy Larson … (2011)
Emerging technologies allow the high-throughput profiling of metabolic status from a blood specimen (metabolomics). We investigated whether metabolite profiles could predict the development of diabetes. Among 2,422 normoglycemic individuals followed for 12 years, 201 developed diabetes. Amino acids, amines and other polar metabolites were profiled in baseline specimens by liquid chromatography-tandem mass spectrometry (LC-MS). Cases and controls were matched for age, body mass index and fasting glucose. Five branched-chain and aromatic amino acids had highly significant associations with future diabetes: isoleucine, leucine, valine, tyrosine and phenylalanine. A combination of three amino acids predicted future diabetes (with a more than fivefold higher risk for individuals in top quartile). The results were replicated in an independent, prospective cohort. These findings underscore the potential key role of amino acid metabolism early in the pathogenesis of diabetes and suggest that amino acid profiles could aid in diabetes risk assessment.