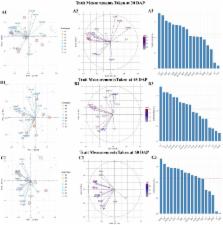 The development of cassava genotypes with root system traits that increase soil resource acquisition could increase yields on infertile soils but there are relatively few work that has quantified cassava root system architecture (RSA). We used an easily adaptable and inexpensive protocol to: (i) measure genotypic variation for RSA and shoot traits of a range of cassava genotypes; and (ii) identify candidate variables that contribute the largest share of variance. Cassava genotypes were grown in soil-filled pots, maintained at 70% field capacity. Shoot and RSA traits were measured on plants grown up to 30, 45 and 60 days. Multivariate analysis was used to determine major traits contributing to variation. The study showed that cassava roots are adventitious in origin consisting of a main root axis and orders of lateral roots, and therefore the historically used term “fibrous roots” are redundant currently not contributing to clarity. There were significant differences ( P < 0.05) for traits evaluated. The highest relative root growth rate occurred over the first 30 days and ranged from 0.39 to 0.48 cm day −1. Root fresh weight was significantly correlated with other traits, including root length ( r = 0.79), leaf area ( r = 0.72), number of lower nodal roots ( r = 0.60), indicating that direct selection based on these traits might be sufficient to improve root biomass. Up to the first six principal components explained over 80% of the total variation among the genotypes for the traits measured at 30, 45 and 60 days. Leaf area, root diameter and branching density-related traits were the most important traits contributing to variation. Selection of cassava genotypes based on shoot and root biomass, root diameter and branching density at juvenile growth stage could be successful predictors of nutrient and water-use efficiency in the field. Further studies are required to relate studied juvenile cassava root traits with the performance of field-grown-mature plant with regard to drought, nutrient-use efficiency and yield.

Pot size matters: a meta-analysis of the effects of rooting volume on plant growth

Biplot Analysis of Test Sites and Trait Relations of Soybean in Ontario.

Weikai Yan,  Istvan Rajcan (2002)
Superior crop cultivars must be identified through multi-environment trials (MET) and on the basis of multiple traits. The objectives of this paper were to describe two types of biplots, the GGE biplot and the GT biplot, which graphically display genotype by environment data and genotype by trait data, respectively, and hence facilitate cultivar evaluation on the basis of MET data and multiple traits. Genotype main effect plus genotype by environment interaction effect (GGE) biplot analysis of the soybean [Glycine max (L.) Merr.] yield data for the 2800 crop heat unit area of Ontario for MET in the period 1994-1999 revealed yearly crossover genotype by site interactions. The eastern Ontario site Winchester showed a different genotype response pattern from the three southwestern Ontario sites in four of the six years. The interactions were not large enough to divide the area into different mega-environments as when analyzed over years, a single cultivar yielded the best in all four sites. The southwestern site, St. Pauls, was found to always group together with at least one of the other three sites; it did not provide unique information on genotype performance. Therefore, in future cultivar evaluations, Winchester should always be used but St. Pauls can be dismissed. Applying GT biplot to the 1994-1999 multiple trait data illustrated that GT biplots graphically displayed the interrelationships among seed yield, oil content, protein content, plant height, and days to maturity, among other traits, and facilitated visual cultivar comparisons and selection. It was found that selection for seed yield alone was not only the simplest, but also the most effective strategy in the early stages of soybean breeding.