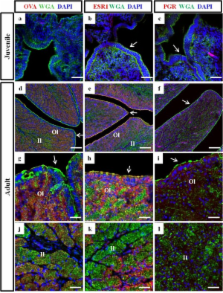 Although chicken oviduct is a useful model and target tissue for reproductive biology and transgenesis, little is known because of the highly specific hormonal regulation and the lack of fundamental researches, including lectin-binding activities and glycobiology. Because lectin is attached to secreted glycoproteins, we hypothesized that lectin could be bound to secretory egg-white proteins, and played a crucial role in the generation of egg-white protein in the oviduct. Hence, the purpose of this study was to investigate the structural, histological and lectin-binding characteristics of the chicken oviductal magnum from juvenile and adult hens.

The oviductal magnums from juvenile and adult hens were prepared for ultrastructural analysis, qRT-PCR and immunostaining. Immunohistochemistry of anti-ovalbumin, anti-ESR1 and anti-PGR, and mRNA expression of egg-white genes and steroid hormone receptor genes were evaluated. Lectin histochemical staining was also conducted in juvenile and adult oviductal magnum tissues.

The observation of ultrastructural analysis, mRNA expression, immunohistochemistry and lectin staining showed structural and physiological characterization of juvenile and adult oviductal magnum. Consequently, oviduct study could be helped to in vitro culture of chicken oviductal cells, to develop epithelial or tubular gland cell-specific markers, and to understand female reproductive biology and endocrinology.

Robert Etches,  R. Bradshaw,  Jennifer Swanberg … (2006)
Primordial germ cells (PGCs) are the precursors of sperm and eggs. In most animals, segregation of the germ line from the somatic lineages is one of the earliest events in development; in avian embryos, PGCs are first identified in an extra-embryonic region, the germinal crescent, after approximately 18 h of incubation. After 50-55 h of development, PGCs migrate to the gonad and subsequently produce functional sperm and oocytes. So far, cultures of PGCs that remain restricted to the germ line have not been reported in any species. Here we show that chicken PGCs can be isolated, cultured and genetically modified while maintaining their commitment to the germ line. Furthermore, we show that chicken PGCs can be induced in vitro to differentiate into embryonic germ cells that contribute to somatic tissues. Retention of the commitment of PGCs to the germ line after extended periods in culture and after genetic modification combined with their capacity to acquire somatic competence in vitro provides a new model for developmental biology. The utility of the model is enhanced by the accessibility of the avian embryo, which facilitates access to the earliest stages of development and supplies a facile route for the reintroduction of PGCs into the embryonic vasculature. In addition, these attributes create new opportunities to manipulate the genome of chickens for agricultural and pharmaceutical applications.

T. Shantha Raju,  S Borge,  Stephanie Jones … (2000)
Immunoglobulins (IgG) are soluble serum glycoproteins in which the oligosaccharides play significant roles in the bioactivity and pharmacokinetics. Recombinant immuno-globulins (rIgG) produced in different host cells by recombinant DNA technology are becoming major therapeutic agents to treat life threatening diseases such as cancer. Since glycosylation is cell type specific, rIgGs produced in different host cells contain different patterns of oligosaccharides which could affect the biological functions. In order to determine the extent of this variation N-linked oligosaccharide structures present in the IgGs of different animal species were characterized. IgGs of human, rhesus, dog, cow, guinea pig, sheep, goat, horse, rat, mouse, rabbit, cat, and chicken were treated with peptide-N-glycosidase-F (PNGase F) and the oligosaccharides analyzed by matrix-assisted laser desorption/ionization time-of-flight mass spectrometry (MALDI-TOF-MS) for neutral and acidic oligosaccharides, in positive and negative ion modes, respectively. The data show that for neutral oligosaccharides, the proportions of terminal Gal, core Fuc and/or bisecting GlcNAc containing oligosaccharides vary from species to species; for sialylated oligosaccharides in the negative mode MALDI-TOF-MS show that human and chicken IgG contain oligosaccharides with N-acetylneuraminic acid (NANA), whereas rhesus, cow, sheep, goat, horse, and mouse IgGs contain oligosaccharides with N-glycolylneuraminic acid (NGNA). In contrast, IgGs from dog, guinea pig, rat, and rabbit contain both NANA and NGNA. Further, the PNGase F released oligosaccharides were derivatized with 9-aminopyrene 1,4,6-trisulfonic acid (APTS) and analyzed by capillary electrophoresis with laser induced fluorescence detection (CE-LIF). The CE-LIF results indicate that the proportion of the two isomers of monogalactosylated, biantennary, complex oligosaccharides vary significantly, suggesting that the branch specificity of beta1, 4-galactosyltransferase might be different in different species. These results show that the glycosylation of IgGs is species-specific, and reveal the necessity for appropriate cell line selection to express rIgGs for human therapy. The results of this study are useful for people working in the transgenic area.

Production of human monoclonal antibody in eggs of chimeric chickens.

Wen Zhou,  Zivko L Nikolov,  B S Heyer … (2005)
The tubular gland of the chicken oviduct is an attractive system for protein expression as large quantities of proteins are deposited in the egg, the production of eggs is easily scalable and good manufacturing practices for therapeutics from eggs have been established. Here we examined the ability of upstream and downstream DNA sequences of ovalbumin, a protein produced exclusively in very high quantities in chicken egg white, to drive tissue-specific expression of human mAb in chicken eggs. To accommodate these large regulatory regions, we established and transfected lines of chicken embryonic stem (cES) cells and formed chimeras that express mAb from cES cell-derived tubular gland cells. Eggs from high-grade chimeras contained up to 3 mg of mAb that possesses enhanced antibody-dependent cellular cytotoxicity (ADCC), nonantigenic glycosylation, acceptable half-life, excellent antigen recognition and good rates of internalization.