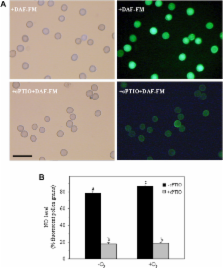 Air pollution is frequently proposed as a cause of the increased incidence of allergy in industrialised countries. We investigated the impact of ozone (O 3) on reactive oxygen species (ROS) and allergen content of ragweed pollen ( Ambrosia artemisiifolia). Pollen was exposed to acute O 3 fumigation, with analysis of pollen viability, ROS and nitric oxide (NO) content, activity of nicotinamide adenine dinucleotide phosphate (NAD[P]H) oxidase, and expression of major allergens. There was decreased pollen viability after O 3 fumigation, which indicates damage to the pollen membrane system, although the ROS and NO contents were not changed or were only slightly induced, respectively. Ozone exposure induced a significant enhancement of the ROS-generating enzyme NAD(P)H oxidase. The expression of the allergen Amb a 1 was not affected by O 3, determined from the mRNA levels of the major allergens. We conclude that O 3 can increase ragweed pollen allergenicity through stimulation of ROS-generating NAD(P)H oxidase.

This study focuses on the effects of the atmospheric pollutant ozone on ROS content and NAD(P)H oxidase activity of ragweed pollen grains.

Cleavage of structural proteins during the assembly of the head of bacteriophage T4.

Nitric oxide functions as a signal in plant disease resistance.

Brent R. Dixon,  Don Lamb,  M Delledonne … (1998)
Recognition of an avirulent pathogen triggers the rapid production of the reactive oxygen intermediates superoxide (O2-) and hydrogen peroxide (H2O2). This oxidative burst drives crosslinking of the cell wall, induces several plant genes involved in cellular protection and defence, and is necessary for the initiation of host cell death in the hypersensitive disease-resistance response. However, this burst is not enough to support a strong disease-resistance response. Here we show that nitric oxide, which acts as a signal in the immune, nervous and vascular systems, potentiates the induction of hypersensitive cell death in soybean cells by reactive oxygen intermediates and functions independently of such intermediates to induce genes for the synthesis of protective natural products. Moreover, inhibitors of nitric oxide synthesis compromise the hypersensitive disease-resistance response of Arabidopsis leaves to Pseudomonas syringae, promoting disease and bacterial growth. We conclude that nitric oxide plays a key role in disease resistance in plants.