Contact Networks in a Wildlife-Livestock Host Community: Identifying High-Risk Individuals in the Transmission of Bovine TB among Badgers and Cattle 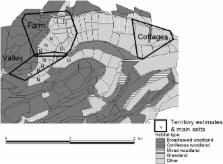 The management of many pathogens, which are of concern to humans and their livestock, is complicated by the pathogens' ability to cross-infect multiple host species, including wildlife. This has major implications for the management of such diseases, since the dynamics of infection are dependent on the rates of both intra- and inter-specific transmission. However, the difficulty of studying transmission networks in free-living populations means that the relative opportunities for intra- versus inter-specific disease transmission have not previously been demonstrated empirically within any wildlife-livestock disease system.

Using recently-developed proximity data loggers, we quantify both intra-and inter-specific contacts in a wildlife-livestock disease system, using bovine tuberculosis (bTB) in badgers and cattle in the UK as our example. We assess the connectedness of individuals within the networks in order to identify whether there are certain ‘high-risk’ individuals or groups of individuals for disease transmission within and between species. Our results show that contact patterns in both badger and cattle populations vary widely, both between individuals and over time. We recorded only infrequent interactions between badger social groups, although all badgers fitted with data loggers were involved in these inter-group contacts. Contacts between badgers and cattle occurred more frequently than contacts between different badger groups. Moreover, these inter-specific contacts involved those individual cows, which were highly connected within the cattle herd.

This work represents the first continuous time record of wildlife-host contacts for any free-living wildlife-livestock disease system. The results highlight the existence of specific individuals with relatively high contact rates in both livestock and wildlife populations, which have the potential to act as hubs in the spread of disease through complex contact networks. Targeting testing or preventive measures at high-contact groups and individuals within livestock populations would enhance the effectiveness and efficiency of disease management strategies.

J. F. Mitchell,  J Mawdsley,  Nigel A D Bourn … (2005)
For 20 years, bovine tuberculosis (BTB) has been spreading in Great Britain (England, Wales and Scotland) and is now endemic in the southwest and parts of central England and in southwest Wales, and occurs sporadically elsewhere. Although its transmission pathways remain poorly understood, the disease's distribution was previously modelled statistically by using environmental variables and measures of their seasonality. Movements of infected animals have long been considered a critical factor in the spread of livestock diseases, as reflected in strict import/export regulations, the extensive movement restrictions imposed during the 2001 foot-and-mouth disease outbreak, the tracing procedures after a new case of BTB has been confirmed and the Government's recently published strategic framework for the sustainable control on BTB. Since January 2001 it has been mandatory for stock-keepers in Great Britain to notify the British Cattle Movement Service of all cattle births, movements and deaths. Here we show that movements as recorded in the Cattle Tracing System data archive, and particularly those from areas where BTB is reported, consistently outperform environmental, topographic and other anthropogenic variables as the main predictor of disease occurrence. Simulation distribution models for 2002 and 2003, incorporating all predictor categories, are presented and used to project distributions for 2004 and 2005.

The implications of network structure for epidemic dynamics.

Kim M Keeling (2005)
It has long been realised that the standard assumptions of mass-action mixing are a crude approximation of the true mechanistic processes that govern the transmission of infection. In particular, many infections can be considered to be spread through a limited network of contacts. Yet, despite the underlying discrepancies, mass-action models continue to be used and provide a remarkably accurate description of epidemic behaviour. Here, the differences between mass-action and network-based models are investigated. This allows us to determine when mass-action models are a reliable tool, and suggest ways in which their behaviour should be refined.

Publisher ID: 08-PONE-RA-06249R1
DOI: 10.1371/journal.pone.0005016
PMC ID: 2660423
PubMed ID: 19401755
Copyright statement: Bohm et al. This is an open-access article distributed under the terms of the Creative Commons Attribution License, which permits unrestricted use, distribution, and reproduction in any medium, provided the original author and source are credited.