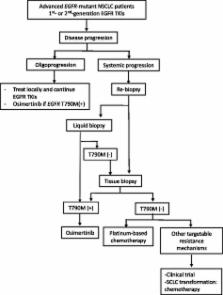 Recent advances in diagnosis and treatment are enabling a more targeted approach to treating lung cancers. Therapy targeting the specific oncogenic driver mutation could inhibit tumor progression and provide a favorable prognosis in clinical practice. Activating mutations of epidermal growth factor receptor ( EGFR) in non-small cell lung cancer (NSCLC) are a favorable predictive factor for EGFR tyrosine kinase inhibitors (TKIs) treatment. For lung cancer patients with EGFR-exon 19 deletions or an exon 21 Leu858Arg mutation, the standard first-line treatment is first-generation (gefitinib, erlotinib), or second-generation (afatinib) TKIs. EGFR TKIs improve response rates, time to progression, and overall survival. Unfortunately, patients with EGFR mutant lung cancer develop disease progression after a median of 10 to 14 months on EGFR TKI. Different mechanisms of acquired resistance to first-generation and second-generation EGFR TKIs have been reported. Optimal treatment for the various mechanisms of acquired resistance is not yet clearly defined, except for the T790M mutation. Repeated tissue biopsy is important to explore resistance mechanisms, but it has limitations and risks. Liquid biopsy is a valid alternative to tissue re-biopsy. Osimertinib has been approved for patients with T790M-positive NSCLC with acquired resistance to EGFR TKI. For other TKI-resistant mechanisms, combination therapy may be considered. In addition, the use of immunotherapy in lung cancer treatment has evolved rapidly. Understanding and clarifying the biology of the resistance mechanisms of EGFR-mutant NSCLC could guide future drug development, leading to more precise therapy and advances in treatment.

Activation of the PD-1 pathway contributes to immune escape in EGFR-driven lung tumors.

Thomas A. Miller,  William Pao,  Mark Kris … (2010)
Ten percent of North American patients with non-small-cell lung cancer have tumors with somatic mutations in the gene for the epidermal growth factor receptor (EGFR). Approximately 70% of patients whose lung cancers harbor somatic mutations in exons encoding the tyrosine kinase domain of EGFR experience significant tumor regressions when treated with the EGFR tyrosine kinase inhibitors (TKIs) gefitinib or erlotinib. However, the overwhelming majority of these patients inevitably acquire resistance to either drug. Currently, the clinical definition of such secondary or acquired resistance is not clear. We propose the following criteria be used to define more precisely acquired resistance to EGFR TKIs. All patients should have the following criteria: previous treatment with a single-agent EGFR TKI (eg, gefitinib or erlotinib); either or both of the following: a tumor that harbors an EGFR mutation known to be associated with drug sensitivity or objective clinical benefit from treatment with an EGFR TKI; systemic progression of disease (Response Evaluation Criteria in Solid Tumors [RECIST] or WHO) while on continuous treatment with gefitinib or erlotinib within the last 30 days; and no intervening systemic therapy between cessation of gefitinib or erlotinib and initiation of new therapy. The relatively simple definition proposed here will lead to a more uniform approach to investigating the problem of acquired resistance to EGFR TKIs in this unique patient population. These guidelines should minimize reporting of false-positive and false-negative activity in these clinical trials and would facilitate the identification of agents that truly overcome acquired resistance to gefitinib and erlotinib.

Lecia V. Sequist,  Jean-Charles Soria,  Jonathan W. Goldman … (2015)
Non-small-cell lung cancer (NSCLC) with a mutation in the gene encoding epidermal growth factor receptor (EGFR) is sensitive to approved EGFR inhibitors, but resistance develops, mediated by the T790M EGFR mutation in most cases. Rociletinib (CO-1686) is an EGFR inhibitor active in preclinical models of EGFR-mutated NSCLC with or without T790M. In this phase 1-2 study, we administered rociletinib to patients with EGFR-mutated NSCLC who had disease progression during previous treatment with an existing EGFR inhibitor. In the expansion (phase 2) part of the study, patients with T790M-positive disease received rociletinib at a dose of 500 mg twice daily, 625 mg twice daily, or 750 mg twice daily. Key objectives were assessment of safety, side-effect profile, pharmacokinetics, and preliminary antitumor activity of rociletinib. Tumor biopsies to identify T790M were performed during screening. Treatment was administered in continuous 21-day cycles. A total of 130 patients were enrolled. The first 57 patients to be enrolled received the free-base form of rociletinib (150 mg once daily to 900 mg twice daily). The remaining patients received the hydrogen bromide salt (HBr) form (500 mg twice daily to 1000 mg twice daily). A maximum tolerated dose (the highest dose associated with a rate of dose-limiting toxic effects of less than 33%) was not identified. The only common dose-limiting adverse event was hyperglycemia. In an efficacy analysis that included patients who received free-base rociletinib at a dose of 900 mg twice daily or the HBr form at any dose, the objective response rate among the 46 patients with T790M-positive disease who could be evaluated was 59% (95% confidence interval [CI], 45 to 73), and the rate among the 17 patients with T790M-negative disease who could be evaluated was 29% (95% CI, 8 to 51). Rociletinib was active in patients with EGFR-mutated NSCLC associated with the T790M resistance mutation. (Funded by Clovis Oncology; ClinicalTrials.gov number, NCT01526928.).