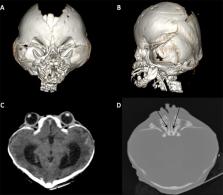 Apert, Pfeiffer, and Crouzon syndromes are autosomal dominant diseases characterized by craniosynostosis. They are paternal age effect disorders. The association between paternal age and Beare–Stevenson syndrome (BSS), a very rare and severe craniosynostosis, is uncertain. Gain-of-function mutations in FGFR2 become progressively enriched in testes as men age and were shown to cause these syndromes.

Here, we describe a child affected with BSS, whose father was 36 years old and had congenital bilateral absence of the vas deferens (CBAVD). The child was heterozygous for the pathogenic FGFR2 variant c.1124A > G p.Tyr375Cys. By reviewing the literature, we found that BSS fathers are older than BSS mothers (mean age in years: 39 ± 10 vs 30 ± 6, p = 0.006). Male age greater than 34 years and CBAVD are both factors associated with poor spermogram parameters, which may represent an additional selective pressure to sperm carrying FGFR2 gain-of-function mutations.

These findings are consistent with the hypothesis that BSS is a paternal-origin genetic disorder. Further experimental studies would be needed to confirm this hypothesis.

Joris A. Veltman,  Han Brunner (2012)
New mutations have long been known to cause genetic disease, but their true contribution to the disease burden can only now be determined using family-based whole-genome or whole-exome sequencing approaches. In this Review we discuss recent findings suggesting that de novo mutations play a prominent part in rare and common forms of neurodevelopmental diseases, including intellectual disability, autism and schizophrenia. De novo mutations provide a mechanism by which early-onset reproductively lethal diseases remain frequent in the population. These mutations, although individually rare, may capture a significant part of the heritability for complex genetic diseases that is not detectable by genome-wide association studies.

Rocio Acuna-Hidalgo,  Joris A. Veltman,  Alexander Hoischen (2016)
Aside from inheriting half of the genome of each of our parents, we are born with a small number of novel mutations that occurred during gametogenesis and postzygotically. Recent genome and exome sequencing studies of parent–offspring trios have provided the first insights into the number and distribution of these de novo mutations in health and disease, pointing to risk factors that increase their number in the offspring. De novo mutations have been shown to be a major cause of severe early-onset genetic disorders such as intellectual disability, autism spectrum disorder, and other developmental diseases. In fact, the occurrence of novel mutations in each generation explains why these reproductively lethal disorders continue to occur in our population. Recent studies have also shown that de novo mutations are predominantly of paternal origin and that their number increases with advanced paternal age. Here, we review the recent literature on de novo mutations, covering their detection, biological characterization, and medical impact.

Anne Goriely,  Andrew O.M. Wilkie (2012)
Advanced paternal age has been associated with an increased risk for spontaneous congenital disorders and common complex diseases (such as some cancers, schizophrenia, and autism), but the mechanisms that mediate this effect have been poorly understood. A small group of disorders, including Apert syndrome (caused by FGFR2 mutations), achondroplasia, and thanatophoric dysplasia (FGFR3), and Costello syndrome (HRAS), which we collectively term "paternal age effect" (PAE) disorders, provides a good model to study the biological and molecular basis of this phenomenon. Recent evidence from direct quantification of PAE mutations in sperm and testes suggests that the common factor in the paternal age effect lies in the dysregulation of spermatogonial cell behavior, an effect mediated molecularly through the growth factor receptor-RAS signal transduction pathway. The data show that PAE mutations, although arising rarely, are positively selected and expand clonally in normal testes through a process akin to oncogenesis. This clonal expansion, which is likely to take place in the testes of all men, leads to the relative enrichment of mutant sperm over time-explaining the observed paternal age effect associated with these disorders-and in rare cases to the formation of testicular tumors. As regulation of RAS and other mediators of cellular proliferation and survival is important in many different biological contexts, for example during tumorigenesis, organ homeostasis and neurogenesis, the consequences of selfish mutations that hijack this process within the testis are likely to extend far beyond congenital skeletal disorders to include complex diseases, such as neurocognitive disorders and cancer predisposition. Copyright © 2012 The American Society of Human Genetics. Published by Elsevier Inc. All rights reserved.

This article was submitted to Genetic Disorders, a section of the journal Frontiers in Genetics