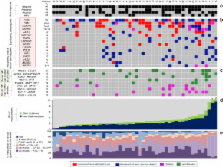 Gingivo-buccal oral squamous cell carcinoma (OSCC-GB), an anatomical and clinical subtype of head and neck squamous cell carcinoma (HNSCC), is prevalent in regions where tobacco-chewing is common. Exome sequencing ( n=50) and recurrence testing ( n=60) reveals that some significantly and frequently altered genes are specific to OSCC-GB ( USP9X, MLL4, ARID2, UNC13C and TRPM3), while some others are shared with HNSCC (for example, TP53, FAT1, CASP8, HRAS and NOTCH1). We also find new genes with recurrent amplifications (for example, DROSHA, YAP1) or homozygous deletions (for example, DDX3X) in OSCC-GB. We find a high proportion of C>G transversions among tobacco users with high numbers of mutations. Many pathways that are enriched for genomic alterations are specific to OSCC-GB. Our work reveals molecular subtypes with distinctive mutational profiles such as patients predominantly harbouring mutations in CASP8 with or without mutations in FAT1. Mean duration of disease-free survival is significantly elevated in some molecular subgroups. These findings open new avenues for biological characterization and exploration of therapies. 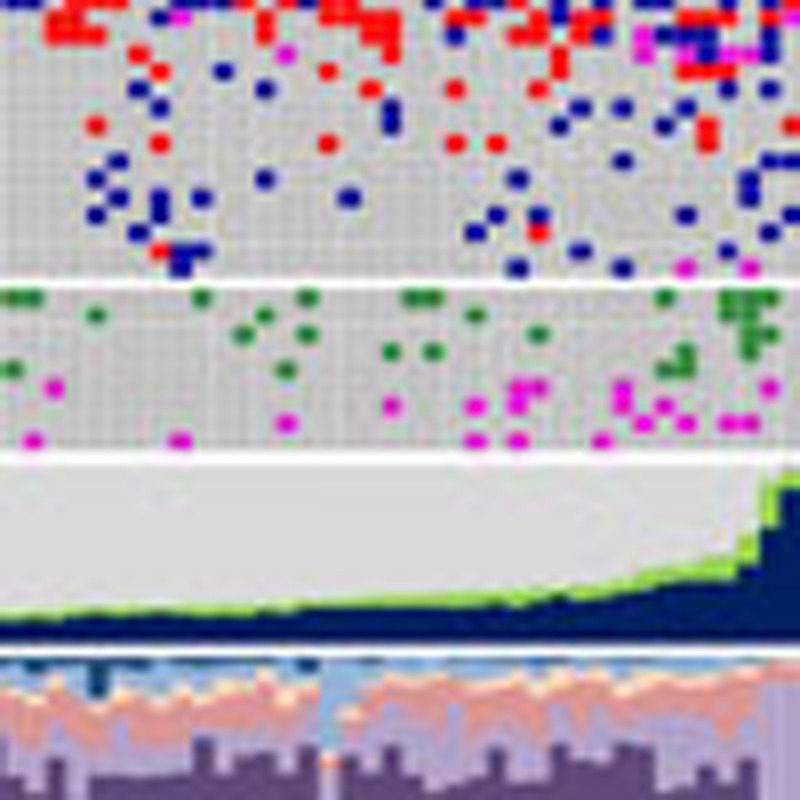 Gingivo-buccal oral squamous cell carcinoma (OSCC-GB) is the leading cancer among males in India. Here, the authors carry out exome sequencing and recurrence testing in patients with OSCC-GB and highlight genes and biological pathways associated with the disease.

N. Agrawal,  M Frederick,  C. R. Pickering … (2011)
Head and neck squamous cell carcinoma (HNSCC) is the sixth most common cancer worldwide. To explore the genetic origins of this cancer, we used whole-exome sequencing and gene copy number analyses to study 32 primary tumors. Tumors from patients with a history of tobacco use had more mutations than did tumors from patients who did not use tobacco, and tumors that were negative for human papillomavirus (HPV) had more mutations than did HPV-positive tumors. Six of the genes that were mutated in multiple tumors were assessed in up to 88 additional HNSCCs. In addition to previously described mutations in TP53, CDKN2A, PIK3CA, and HRAS, we identified mutations in FBXW7 and NOTCH1. Nearly 40% of the 28 mutations identified in NOTCH1 were predicted to truncate the gene product, suggesting that NOTCH1 may function as a tumor suppressor gene rather than an oncogene in this tumor type.

Sophie Sun,  Joan H. Schiller,  A Gazdar (2007)
Although most lung cancers are a result of smoking, approximately 25% of lung cancer cases worldwide are not attributable to tobacco use, accounting for over 300,000 deaths each year. Striking differences in the epidemiological, clinical and molecular characteristics of lung cancers arising in never smokers versus smokers have been identified, suggesting that they are separate entities. This Review summarizes our current knowledge of this unique and poorly understood disease.

Ras in cancer and developmental diseases.

Eugenio Santos,  Alberto Fernández-Teruel (2011)
Somatic, gain-of-function mutations in ras genes were the first specific genetic alterations identified in human cancer about 3 decades ago. Studies during the last quarter century have characterized the Ras proteins as essential components of signaling networks controlling cellular proliferation, differentiation, or survival. The oncogenic mutations of the H-ras, N-ras, or K-ras genes frequently found in human tumors are known to throw off balance the normal outcome of those signaling pathways, thus leading to tumor development. Oncogenic mutations in a number of other upstream or downstream components of Ras signaling pathways (including membrane RTKs or cytosolic kinases) have been detected more recently in association with a variety of cancers. Interestingly, the oncogenic Ras mutations and the mutations in other components of Ras/MAPK signaling pathways appear to be mutually exclusive events in most tumors, indicating that deregulation of Ras-dependent signaling is the essential requirement for tumorigenesis. In contrast to sporadic tumors, separate studies have identified germline mutations in Ras and various other components of Ras signaling pathways that occur in specific association with a number of different familial, developmental syndromes frequently sharing common phenotypic cardiofaciocutaneous features. Finally, even without being a causative force, defective Ras signaling has been cited as a contributing factor to many other human illnesses, including diabetes and immunological and inflammatory disorders. We aim this review at summarizing and updating current knowledge on the contribution of Ras mutations and altered Ras signaling to development of various tumoral and nontumoral pathologies.

A full list of India Project Team of the International Cancer Genome Consortium and their affiliations appears at the end of the paper.

This work is licensed under a Creative Commons Attribution-NonCommercial-NoDerivs 3.0 Unported License. To view a copy of this license, visit http://creativecommons.org/licenses/by-nc-nd/3.0/