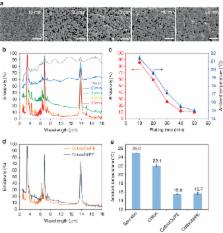 Space heating accounts for the largest energy end-use of buildings that imposes significant burden on the society. The energy wasted for heating the empty space of the entire building can be saved by passively heating the immediate environment around the human body. Here, we demonstrate a nanophotonic structure textile with tailored infrared (IR) property for passive personal heating using nanoporous metallized polyethylene. By constructing an IR-reflective layer on an IR-transparent layer with embedded nanopores, the nanoporous metallized polyethylene textile achieves a minimal IR emissivity (10.1%) on the outer surface that effectively suppresses heat radiation loss without sacrificing wearing comfort. This enables 7.1 °C decrease of the set-point compared to normal textile, greatly outperforming other radiative heating textiles by more than 3 °C. This large set-point expansion can save more than 35% of building heating energy in a cost-effective way, and ultimately contribute to the relief of global energy and climate issues.

Energy wasted for heating the empty space of the entire building can be saved by passively heating the immediate environment around the human body. Here, the authors show a nanophotonic structure textile with tailored infrared property for passive personal heating using nanoporous metallized polyethylene.

Mussel-inspired polydopamine: a biocompatible and ultrastable coating for nanoparticles in vivo.

Xiangsheng Liu, Jieming Cao, Huan Li … (2013)
Bioinspired polydopamine (PDA) has served as a universal coating to nanoparticles (NPs) for various biomedical applications. However, one remaining critical question is whether the PDA shell on NPs is stable in vivo. In this study, we modified gold nanoparticles (GNPs) with finely controlled PDA nanolayers to form uniform core/shell nanostructures (GNP@PDA). In vitro study showed that the PDA-coated GNPs had low cytotoxicity and could smoothly translocate to cancer cells. Transmission electron microscopy (TEM) analysis demonstrated that the PDA nanoshells were intact within cells after 24 h incubation. Notably, we found the GNP@PDA could partially escape from the endosomes/lysosomes to cytosol and locate close to the nucleus. Furthermore, we observed that the PDA-coated NPs have very different uptake behavior in two important organs of the liver and spleen: GNP@PDA in the liver were mainly uptaken by the Kupffer cells, while the GNP@PDA in the spleen were uptaken by a variety of cells. Importantly, we proved the PDA nanoshells were stable within cells of the liver and spleen for at least six weeks, and GNP@PDA did not show notable histological toxicity to main organs of mice in a long time. These results provided the direct evidence to support that the PDA surface modification can serve as an effective strategy to form ultrastable coatings on NPs in vivo, which can improve the intracellular delivery capacity and biocompatibility of NPs for biomedical application.