Urbanisation and health in China 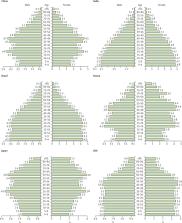 China has seen the largest human migration in history, and the country's rapid urbanisation has important consequences for public health. A provincial analysis of its urbanisation trends shows shifting and accelerating rural-to-urban migration across the country and accompanying rapid increases in city size and population. The growing disease burden in urban areas attributable to nutrition and lifestyle choices is a major public health challenge, as are troubling disparities in health-care access, vaccination coverage, and accidents and injuries in China's rural-to-urban migrant population. Urban environmental quality, including air and water pollution, contributes to disease both in urban and in rural areas, and traffic-related accidents pose a major public health threat as the country becomes increasingly motorised. To address the health challenges and maximise the benefits that accompany this rapid urbanisation, innovative health policies focused on the needs of migrants and research that could close knowledge gaps on urban population exposures are needed.

Prevalence, awareness, treatment, and control of hypertension in China: data from the China National Nutrition and Health Survey 2002.

Runlin Gao,  Vibeke Anna,  Lingzhi Kong … (2008)
The present article aims to provide accurate estimates of the prevalence, awareness, treatment, and control of hypertension in adults in China. Data were obtained from sphygmomanometer measurements and an administered questionnaire from 141 892 Chinese adults >/=18 years of age who participated in the 2002 China National Nutrition and Health Survey. In 2002, approximately 153 million Chinese adults were hypertensive. The prevalence was higher among men than women (20% versus 17%; P<0.001) and was higher in successive age groups. Overall, the prevalence of hypertension was higher in urban compared with rural areas in men (23% versus 18%; P<0.01) and women (18% versus 16%; P<0.001). Of the 24% affected individuals who were aware of their condition, 78% were treated and 19% were adequately controlled. Despite evidence to suggest improved levels of treatment in individuals with hypertension over the past decade, compared with estimates from 1991, the ratio of controlled to treated hypertension has remained largely unchanged at 1:4. One in 6 Chinese adults is hypertensive, but only one quarter are aware of their condition. Despite increased rates of blood pressure-lowering treatment, few have their hypertension effectively controlled. National hypertension programs must focus on improving awareness in the wider community, as well as treatment and control, to prevent many tens of thousands of cardiovascular-related deaths.

Reform of how health care is paid for in China: challenges and opportunities.

Shanlian Hu,  Shenglan Tang,  Yuanli Liu … (2008)
China's current strategy to improve how health services are paid for is headed in the right direction, but much more remains to be done. The problems to be resolved, reflecting the setbacks of recent decades, are substantial: high levels of out-of-pocket payments and cost escalation, stalled progress in providing adequate health insurance for all, widespread inefficiencies in health facilities, uneven quality, extensive inequality, and perverse incentives for hospitals and doctors. China's leadership is taking bold steps to accelerate improvement, including increasing government spending on health and committing to reaching 100% insurance coverage by 2010. China's efforts are part of a worldwide transformation in the financing of health care that will dominate global health in the 21st century. The prospects that China will complete this transformation successfully in the next two decades are good, although success is not guaranteed. The real test, as other countries have experienced, will come when tougher reforms have to be introduced.

Junfeng Zhang,  Kirk Smith (2007)
Objective Nearly all China’s rural residents and a shrinking fraction of urban residents use solid fuels (biomass and coal) for household cooking and/or heating. Consequently, global meta-analyses of epidemiologic studies indicate that indoor air pollution from solid fuel use in China is responsible for approximately 420,000 premature deaths annually, more than the approximately 300,000 attributed to urban outdoor air pollution in the country. Our objective in this review was to help elucidate the extent of this indoor air pollution health hazard. Data sources We reviewed approximately 200 publications in both Chinese- and English-language journals that reported health effects, exposure characteristics, and fuel/stove intervention options. Conclusions Observed health effects include respiratory illnesses, lung cancer, chronic obstructive pulmonary disease, weakening of the immune system, and reduction in lung function. Arsenic poisoning and fluorosis resulting from the use of “poisonous” coal have been observed in certain regions of China. Although attempts have been made in a few studies to identify specific coal smoke constituents responsible for specific adverse health effects, the majority of indoor air measurements include those of only particulate matter, carbon monoxide, sulfur dioxide, and/or nitrogen dioxide. These measurements indicate that pollution levels in households using solid fuel generally exceed China’s indoor air quality standards. Intervention technologies ranging from simply adding a chimney to the more complex modernized bioenergy program are available, but they can be viable only with coordinated support from the government and the commercial sector.