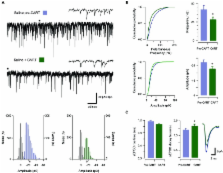 Recent work has established that the paraventricular thalamus (PVT) is a central node in the brain reward-seeking pathway. This role is mediated in part through projections from hypothalamic peptide transmitter systems such as cocaine- and amphetamine-regulated transcript (CART). Consistent with this proposition, we previously found that inactivation of the PVT or infusions of CART into the PVT suppressed drug-seeking behavior in an animal model of contingent cocaine self-administration. Despite this work, few studies have assessed how the basic physiological properties of PVT neurons are influenced by exposure to drugs such as cocaine. Further, our previous work did not assess how infusions of CART, which we found to decrease cocaine-seeking, altered the activity of PVT neurons. In the current study we address these issues by recording from anterior PVT (aPVT) neurons in acutely prepared brain slices from cocaine-treated (15 mg/ml, n = 8) and saline-treated (control) animals ( n = 8). The excitability of aPVT neurons was assessed by injecting a series of depolarizing and hyperpolarizing current steps and characterizing the resulting action potential (AP) discharge properties. This analysis indicated that the majority of aPVT neurons exhibit tonic firing (TF), and initial bursting (IB) consistent with previous studies. However, we also identified PVT neurons that exhibited delayed firing (DF), single spiking (SS) and reluctant firing (RF) patterns. Interestingly, cocaine exposure significantly increased the proportion of aPVT neurons that exhibited TF. We then investigated the effects of CART on excitatory synaptic inputs to aPVT neurons. Application of CART significantly suppressed excitatory synaptic drive to PVT neurons in both cocaine-treated and control recordings. This finding is consistent with our previous behavioral data, which showed that CART signaling in the PVT negatively regulates drug-seeking behavior. Together, these studies suggest that cocaine exposure shifts aPVT neurons to a more excitable state (TF). We propose that the capacity of CART to reduce excitatory drive to this population balances the enhanced aPVT excitability to restore the net output of this region in the reward-seeking pathway. This is in line with previous anatomical evidence that the PVT can integrate reward-relevant information and provides a putative mechanism through which drugs of abuse can dysregulate this system in addiction.

R. Buckingham,  Nabil Elshourbagy,  M Yanagisawa … (1998)
The hypothalamus plays a central role in the integrated control of feeding and energy homeostasis. We have identified two novel neuropeptides, both derived from the same precursor by proteolytic processing, that bind and activate two closely related (previously) orphan G protein-coupled receptors. These peptides, termed orexin-A and -B, have no significant structural similarities to known families of regulatory peptides. prepro-orexin mRNA and immunoreactive orexin-A are localized in neurons within and around the lateral and posterior hypothalamus in the adult rat brain. When administered centrally to rats, these peptides stimulate food consumption. prepro-orexin mRNA level is up-regulated upon fasting, suggesting a physiological role for the peptides as mediators in the central feedback mechanism that regulates feeding behavior.

Differential expression of orexin receptors 1 and 2 in the rat brain.

Tim Marcus,  Barbara Elmquist,  Clifford B. Saper … (2001)
Orexins (hypocretins) are neuropeptides synthesized in the central nervous system exclusively by neurons of the lateral hypothalamus. Orexin-containing neurons have widespread projections and have been implicated in complex physiological functions including feeding behavior, sleep states, neuroendocrine function, and autonomic control. Two orexin receptors (OX(1)R and OX(2)R) have been identified, with distinct expression patterns throughout the brain, but a systematic examination of orexin receptor expression in the brain has not appeared. We used in situ hybridization histochemistry to examine the patterns of expression of mRNA for both orexin receptors throughout the brain. OX(1)R mRNA was observed in many brain regions including the prefrontal and infralimbic cortex, hippocampus, paraventricular thalamic nucleus, ventromedial hypothalamic nucleus, dorsal raphe nucleus, and locus coeruleus. OX(2)R mRNA was prominent in a complementary distribution including the cerebral cortex, septal nuclei, hippocampus, medial thalamic groups, raphe nuclei, and many hypothalamic nuclei including the tuberomammillary nucleus, dorsomedial nucleus, paraventricular nucleus, and ventral premammillary nucleus. The differential distribution of orexin receptors is consistent with the proposed multifaceted roles of orexin in regulating homeostasis and may explain the unique role of the OX(2)R receptor in regulating sleep state stability. Copyright 2001 Wiley-Liss, Inc.

Hypothalamic CART is a new anorectic peptide regulated by leptin.

N Vrang,  L Thim,  U Ribel … (1998)
The mammalian hypothalamus strongly influences ingestive behaviour through several different signalling molecules and receptor systems. Here we show that CART (cocaine- and amphetamine-regulated transcript), a brain-located peptide, is a satiety factor and is closely associated with the actions of two important regulators of food intake, leptin and neuropeptide Y. Food-deprived animals show a pronounced decrease in expression of CART messenger RNA in the arcuate nucleus. In animal models of obesity with disrupted leptin signalling, CART mRNA is almost absent from the arcuate nucleus. Peripheral administration of leptin to obese mice stimulates CART mRNA expression. When injected intracerebroventricularly into rats, recombinant CART peptide inhibits both normal and starvation-induced feeding, and completely blocks the feeding response induced by neuropeptide Y. An antiserum against CART increases feeding in normal rats, indicating that CART may be an endogenous inhibitor of food intake in normal animals.

Neurobiology of Addiction Laboratory, School of Biomedical Sciences and Pharmacy, and The Centre for Translational Neuroscience and Mental Health Research, University of Newcastle and the Hunter Medical Research Institute Newcastle, NSW, Australia

This article was submitted to the journal Frontiers in Behavioral Neuroscience.