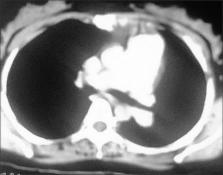 ScienceOpenPublisherPMC
Bookmark
There is no author summary for this article yet. Authors can add summaries to their articles on ScienceOpen to make them more accessible to a non-specialist audience.
Sir, Pulmonary arterial hypertension (PAH) has a varied way of presentations, the most common of which is dyspnea that is initially exertional. Hoarseness of voice as initial and sole presenting feature of a patient of PAH is very rare and until now not reported widely. Patients with idiopathic PAH usually present with nonspecific complaints of fatigue, weakness, breathlessness, or chest pain. Rarely, these patients may present with hoarseness of voice as their initial complaint. This condition is described as Ortner's syndrome or the cardiovocal syndrome. It occurs due to the anatomical disadvantage that the left recurrent laryngeal nerve (RLN) has, by lying between the pulmonary artery and aorta, predisposing it to stretch or trapping upon enlargement of these structures. We are presenting a case of a 23-year-old female with hoarseness of voice as the initial presentation of idiopathic PAH due to compression of the left RLN between the enlarged pulmonary artery and aorta. This case highlights the fact that PAH should be kept in the differential diagnosis of hoarseness of voice, even in the absence of the usual signs and symptoms characteristic of the disease. A 23-year-old homemaker presented to us with hoarseness of voice for 2 months. There were no other respiratory complaints, no history of upper respiratory tract infection, smoking, vocal abuse, trauma, or any previous surgery. General physical examination was not significant. Bilateral vesicular breath sounds were heard over the chest. On cardiovascular system examination, right parasternal heave was present, and a pan-systolic murmur was heard at the tricuspid area. The routine blood investigations, including blood counts, liver, and kidney functions were within normal limits. Chest radiograph [Figure 1] was suggestive of cardiomegaly with prominent pulmonary conus. The electrocardiograph showed right axis deviation, right ventricular hypertrophy, and poor progression of R waves. This was followed by a two-dimensional echocardiography, which revealed dilatation of the right atria and ventricle, right ventricular wall motion abnormality with severe PAH (mean pulmonary artery pressure (PAP) ~50 mmHg, pulmonary artery systolic pressure = 74 mmHg and tricuspid regurgitant jet velocity = 4.0 m/s. There was no evidence of atrial septal defect on contrast study. Figure 1 Chest radiograph suggestive of cardiomegaly To search for a cause for pulmonary hypertension (PH), a computed tomography (CT) thorax [Figure 2] was performed which showed no lung parenchymal abnormality and dilated pulmonary trunk. Ultrasonography of abdomen was normal. Blood investigations for human immunodeficiency virus (HIV), thyroid profile, and extractable nuclear antigen (ENA) for connective tissue disorders were also within normal limits. Figure 2 Computed tomography thorax revealing normal lung parenchyma Hence, the patient was diagnosed to have idiopathic PAH, and the hoarseness of voice was explained by Ortner's syndrome. Baseline functional status was established by the 6 min walk test. Walk distance was 322 m, and the patient did not desaturate during the test. She was started on tadalafil 40 mg once daily with potassium-sparing loop diuretics. She is in monthly follow-up at our institute, and there has been an improvement in voice. PH is defined as an increase in mean PAP ≥25 mmHg at rest as assessed by the right heart catheterization.[1] PAH (Group 1 PH) includes heterogenous conditions that have similar clinical, hemodynamic profiles, and pathological changes. According to the Dana Point (2008) classification of PH,[2] PAH includes idiopathic PAH, heritable, drug-induced, and associated with PAH groups. PAH is a rare disease. Although worldwide prevalence rates are not known, overall prevalence in European countries has been reported as 15–50 cases per million population.[3] PAH usually presents with easy fatigability, dyspnea, chest pain, or syncope. Hoarseness of voice is rare in patients with PAH. The left RLN passes under the arch of the aorta to reach the larynx. This anatomical location puts it at the disadvantage of being compressed by enlargement of the nearby cardiac chambers or great vessels. Left RLN palsy due to the cardiac cause is known as Ortner's syndrome or the cardio-vocal syndrome.[4] The common causes are left atrial enlargement, usually secondary to mitral stenosis, or thoracic aortic aneurysm. In rare cases of PAH, there is trapping of the left RLN between the aorta and the dilated left pulmonary artery, leading to Ortner's syndrome.[5 6] The diagnosis of PH in our case was established by chest radiography, electrocardiography, and echocardiography. Further investigations were performed to rule out known causes of PH, such as CT thorax for class 3 (secondary to lung diseases), contrast echo for congenital valvular heart diseases, ultrasonogram of the abdomen for portal hypertension, ENA profile for connective tissue disorders such as scleroderma, HIV testing, and fasting thyroid profile. After ruling out known causes of PH, we reached to the diagnosis of idiopathic PAH. The patient was started on vasodilator and diuretic treatment and is doing well since then. Like every other disease in medical science, PAH can also present in varied ways. Other than the tell-tale signs and symptoms of the disease, hoarseness of voice as a symptom should be kept in mind as it could be the initial manifestation, as in this case. Treatment of idiopathic PAH is feasible nowadays, and good response can be expected if diagnosed early and managed properly. Financial support and sponsorship Nil. Conflicts of interest There are no conflicts of interest.

Rebecca McMurray,  A. Peacock,  Philip Stewart … (2007)
All hospitalisations for pulmonary arterial hypertension (PAH) in the Scottish population were examined to determine the epidemiological features of PAH. These data were compared with expert data from the Scottish Pulmonary Vascular Unit (SPVU). Using the linked Scottish Morbidity Record scheme, data from all adults aged 16-65 yrs admitted with PAH (idiopathic PAH, pulmonary hypertension associated with congenital heart abnormalities and pulmonary hypertension associated with connective tissue disorders) during the period 1986-2001 were identified. These data were compared with the most recent data in the SPVU database (2005). Overall, 374 Scottish males and females aged 16-65 yrs were hospitalised with incident PAH during 1986-2001. The annual incidence of PAH was 7.1 cases per million population. On December 31, 2002, there were 165 surviving cases, giving a prevalence of PAH of 52 cases per million population. Data from the SPVU were available for 1997-2006. In 2005, the last year with a complete data set, the incidence of PAH was 7.6 cases per million population and the corresponding prevalence was 26 cases per million population. Hospitalisation data from the Scottish Morbidity Record scheme gave higher prevalences of pulmonary arterial hypertension than data from the expert centres (Scotland and France). The hospitalisation data may overestimate the true frequency of pulmonary arterial hypertension in the population, but it is also possible that the expert centres underestimate the true frequency.

A STUDY OF THE ETIOLOGICAL BASIS OF PRIMARY PULMONARY HYPERTENSION.