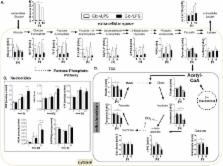 Monocytes enter sites of microbial or sterile inflammation as the first line of defense of the immune system and initiate pro-inflammatory effector mechanisms. We show that activation with bacterial lipopolysaccharide (LPS) induces them to undergo a metabolic shift toward aerobic glycolysis, similar to the Warburg effect observed in cancer cells. At sites of inflammation, however, glucose concentrations are often drastically decreased, which prompted us to study monocyte function under conditions of glucose deprivation and abrogated Warburg effect. Experiments using the Seahorse Extracellular Flux Analyzer revealed that limited glucose supply shifts monocyte metabolism toward oxidative phosphorylation, fueled largely by fatty acid oxidation at the expense of lipid droplets. While this metabolic state appears to provide sufficient energy to sustain functional properties like cytokine secretion, migration, and phagocytosis, it cannot prevent a rise in the AMP/ATP ratio and a decreased respiratory burst. The molecular trigger mediating the metabolic shift and the functional consequences is activation of AMP-activated protein kinase (AMPK). Taken together, our results indicate that monocytes are sufficiently metabolically flexible to perform pro-inflammatory functions at sites of inflammation despite glucose deprivation and inhibition of the LPS-induced Warburg effect. AMPK seems to play a pivotal role in orchestrating these processes during glucose deprivation in monocytes.

Sadia Saeed,  Jessica Quintin,  Hindrik Kerstens … (2014)
Monocyte differentiation into macrophages represents a cornerstone process for host defense. Concomitantly, immunological imprinting of either tolerance or trained immunity determines the functional fate of macrophages and susceptibility to secondary infections. We characterized the transcriptomes and epigenomes in four primary cell types: monocytes and in vitro-differentiated naïve, tolerized, and trained macrophages. Inflammatory and metabolic pathways were modulated in macrophages, including decreased inflammasome activation, and we identified pathways functionally implicated in trained immunity. β-glucan training elicits an exclusive epigenetic signature, revealing a complex network of enhancers and promoters. Analysis of transcription factor motifs in deoxyribonuclease I hypersensitive sites at cell-type-specific epigenetic loci unveiled differentiation and treatment-specific repertoires. Altogether, we provide a resource to understand the epigenetic changes that underlie innate immunity in humans. Copyright © 2014, American Association for the Advancement of Science.

J C Rathmell,  Andrew N. Macintyre,  Alex J. Freemerman … (2014)
Glucose is a critical component in the proinflammatory response of macrophages (MΦs). However, the contribution of glucose transporters (GLUTs) and the mechanisms regulating subsequent glucose metabolism in the inflammatory response are not well understood. Because MΦs contribute to obesity-induced inflammation, it is important to understand how substrate metabolism may alter inflammatory function. We report that GLUT1 (SLC2A1) is the primary rate-limiting glucose transporter on proinflammatory-polarized MΦs. Furthermore, in high fat diet-fed rodents, MΦs in crown-like structures and inflammatory loci in adipose and liver, respectively, stain positively for GLUT1. We hypothesized that metabolic reprogramming via increased glucose availability could modulate the MΦ inflammatory response. To increase glucose uptake, we stably overexpressed the GLUT1 transporter in RAW264.7 MΦs (GLUT1-OE MΦs). Cellular bioenergetics analysis, metabolomics, and radiotracer studies demonstrated that GLUT1 overexpression resulted in elevated glucose uptake and metabolism, increased pentose phosphate pathway intermediates, with a complimentary reduction in cellular oxygen consumption rates. Gene expression and proteome profiling analysis revealed that GLUT1-OE MΦs demonstrated a hyperinflammatory state characterized by elevated secretion of inflammatory mediators and that this effect could be blunted by pharmacologic inhibition of glycolysis. Finally, reactive oxygen species production and evidence of oxidative stress were significantly enhanced in GLUT1-OE MΦs; antioxidant treatment blunted the expression of inflammatory mediators such as PAI-1 (plasminogen activator inhibitor 1), suggesting that glucose-mediated oxidative stress was driving the proinflammatory response. Our results indicate that increased utilization of glucose induced a ROS-driven proinflammatory phenotype in MΦs, which may play an integral role in the promotion of obesity-associated insulin resistance.

Specialty section: This article was submitted to Inflammation, a section of the journal Frontiers in Immunology