Prevalence and determinants of online-sex use in the German population 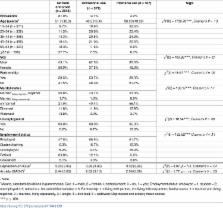 The unlimited access to sexual features in the World Wide Web has raised concerns about excessive and problematic online-sex use. However, little is known about antecedents of internet-sex use of different intensity. Based on a representative German sample of 2,522 participants between the ages of 14 and 97 years, the aims of the present study were (1) to determine the prevalence rates of online-sex users with the short version (ISST GSV) of the Internet Sex Screening Test and (2) to associate online-sex use with anxious vs. avoidant partner attachment patterns and “Big Five” personality traits as potential antecedents.

The ISST is a brief, one-dimensional and reliable measure of online-sex activities (r tt = .69). Overall, 14.7% of respondents reported occasional and 4.2% intensive online-sex use. In multivariate analysis, online-sex use was significantly positively associated with male sex, younger age, unemployment and an anxious partner attachment pattern and negatively with conscientiousness and agreeableness.

Arousal and satisfaction by virtual enactment of sexual phantasies may be attractive for anxiously attached persons who find it difficult to commit to a real life relationship due to fear of rejection or low self-esteem. More knowledge about the individual antecedents of intensive online-sex use may also be helpful for the development of consultation and treatment strategies for excessive and addictive online-sex use.

A brief measure for assessing generalized anxiety disorder: the GAD-7.

Kurt Kroenke,  Austin Spitzer,  Elizabeth J B Williams … (2006)
Generalized anxiety disorder (GAD) is one of the most common mental disorders; however, there is no brief clinical measure for assessing GAD. The objective of this study was to develop a brief self-report scale to identify probable cases of GAD and evaluate its reliability and validity. A criterion-standard study was performed in 15 primary care clinics in the United States from November 2004 through June 2005. Of a total of 2740 adult patients completing a study questionnaire, 965 patients had a telephone interview with a mental health professional within 1 week. For criterion and construct validity, GAD self-report scale diagnoses were compared with independent diagnoses made by mental health professionals; functional status measures; disability days; and health care use. A 7-item anxiety scale (GAD-7) had good reliability, as well as criterion, construct, factorial, and procedural validity. A cut point was identified that optimized sensitivity (89%) and specificity (82%). Increasing scores on the scale were strongly associated with multiple domains of functional impairment (all 6 Medical Outcomes Study Short-Form General Health Survey scales and disability days). Although GAD and depression symptoms frequently co-occurred, factor analysis confirmed them as distinct dimensions. Moreover, GAD and depression symptoms had differing but independent effects on functional impairment and disability. There was good agreement between self-report and interviewer-administered versions of the scale. The GAD-7 is a valid and efficient tool for screening for GAD and assessing its severity in clinical practice and research.

Internet Addiction: The Emergence of a New Clinical Disorder

Kurt Kroenke,  Robert L Spitzer,  Janet B.W. Williams … (2007)
Anxiety, although as common as depression, has received less attention and is often undetected and undertreated. To determine the current prevalence, impairment, and comorbidity of anxiety disorders in primary care and to evaluate a brief measure for detecting these disorders. Criterion-standard study performed between November 2004 and June 2005. 15 U.S. primary care clinics. 965 randomly sampled patients from consecutive clinic patients who completed a self-report questionnaire and agreed to a follow-up telephone interview. 7-item anxiety measure (Generalized Anxiety Disorder [GAD]-7 scale) in the clinic, followed by a telephone-administered, structured psychiatric interview by a mental health professional who was blinded to the GAD-7 results. Functional status (Medical Outcomes Study Short Form-20), depressive and somatic symptoms, and self-reported disability days and physician visits were also assessed. Of the 965 patients, 19.5% (95% CI, 17.0% to 22.1%) had at least 1 anxiety disorder, 8.6% (CI, 6.9% to 10.6%) had posttraumatic stress disorder, 7.6% (CI, 5.9% to 9.4%) had a generalized anxiety disorder, 6.8% (CI, 5.3% to 8.6%) had a panic disorder, and 6.2% (CI, 4.7% to 7.9%) had a social anxiety disorder. Each disorder was associated with substantial impairment that increased significantly (P < 0.001) as the number of anxiety disorders increased. Many patients (41%) with an anxiety disorder reported no current treatment. Receiver-operating characteristic curve analysis showed that both the GAD-7 scale and its 2 core items (GAD-2) performed well (area under the curve, 0.80 to 0.91) as screening tools for all 4 anxiety disorders. The study included a nonrandom sample of selected primary care practices. Anxiety disorders are prevalent, disabling, and often untreated in primary care. A 2-item screening test may enhance detection.

Data Availability All relevant data are within the paper and its Supporting Information file.
Data availability:
ScienceOpen disciplines: Uncategorized