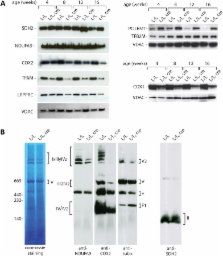 Replication of the mammalian mitochondrial DNA (mtDNA) is dependent on the minimal replisome, consisting of the heterotrimeric mtDNA polymerase (POLG), the hexameric DNA helicase TWINKLE and the tetrameric single-stranded DNA-binding protein (mtSSB). TWINKLE has been shown to unwind DNA during the replication process and many disease-causing mutations have been mapped to its gene. Patients carrying Twinkle mutations develop multiple deletions of mtDNA, deficient respiratory chain function and neuromuscular symptoms. Despite its importance in human disease, it has been unclear whether TWINKLE is the only replicative DNA helicase in mammalian mitochondria. Furthermore, a substantial portion of mtDNA replication events is prematurely terminated at the end of mitochondrial control region (D-loop) and it is unknown whether TWINKLE also has a role in this abortive replication. Here, we present a conditional mouse knockout for Twinkle and demonstrate that TWINKLE is essential for mouse embryonic development and thus is the only replicative DNA helicase in mammalian mitochondria. Conditional knockout of Twinkle results in severe and rapid mtDNA depletion in heart and skeletal muscle. No replication intermediates or deleted mtDNA molecules are observed after Twinkle knockout, suggesting that TWINKLE once loaded is very processive. We also demonstrate that TWINKLE is essential for nascent H-strand synthesis in the D-loop, thus showing that there is no separate DNA helicase responsible for replication of this region. Our data thus suggest that the relative levels of abortive D-loop synthesis versus complete mtDNA replication are regulated and may provide a mechanism to control progression to complete mtDNA replication.

Hermann Schägger,  Gebhard von Jagow (1991)
A discontinuous electrophoretic system for the isolation of membrane proteins from acrylamide gels has been developed using equipment for sodium dodecyl sulfate-polyacrylamide gel electrophoresis (SDS-PAGE). Coomassie dyes were introduced to induce a charge shift on the proteins and aminocaproic acid served to improve solubilization of membrane proteins. Solubilized mitochondria or extracts of heart muscle tissue, lymphoblasts, yeast, and bacteria were applied to the gels. From cells containing mitochondria, all the multiprotein complexes of the oxidative phosphorylation system were separated within one gel. The complexes were resolved into the individual polypeptides by second-dimension Tricine-SDS-PAGE or extracted without SDS for functional studies. The recovery of all respiratory chain complexes was almost quantitative. The percentage recovery of functional activity depended on the respective protein complex studied and was zero for some complexes, but almost quantitative for others. The system is especially useful for small scale purposes, e.g., separation of radioactively labeled membrane proteins, N-terminal protein sequencing, preparation of proteins for immunization, and diagnostic studies of inborn neuromuscular diseases.

Donald L. Court,  Deborah Swing,  J. de Visscher … (2001)
Recently, a highly efficient recombination system for chromosome engineering in Escherichia coli was described that uses a defective lambda prophage to supply functions that protect and recombine a linear DNA targeting cassette with its substrate sequence (Yu et al., 2000, Proc. Natl. Acad. Sci. USA 97, 5978-5983). Importantly, the recombination is proficient with DNA homologies as short as 30-50 bp, making it possible to use PCR-amplified fragments as the targeting cassette. Here, we adapt this prophage system for use in bacterial artificial chromosome (BAC) engineering by transferring it to DH10B cells, a BAC host strain. In addition, arabinose inducible cre and flpe genes are introduced into these cells to facilitate BAC modification using loxP and FRT sites. Next, we demonstrate the utility of this recombination system by using it to target cre to the 3' end of the mouse neuron-specific enolase (Eno2) gene carried on a 250-kb BAC, which made it possible to generate BAC transgenic mice that specifically express Cre in all mature neurons. In addition, we show that fragments as large as 80 kb can be subcloned from BACs by gap repair using this recombination system, obviating the need for restriction enzymes or DNA ligases. Finally, we show that BACs can be modified with this recombination system in the absence of drug selection. The ability to modify or subclone large fragments of genomic DNA with precision should facilitate many kinds of genomic experiments that were difficult or impossible to perform previously and aid in studies of gene function in the postgenomic era. Copyright 2001 Academic Press.

This is an Open Access article distributed under the terms of the Creative Commons Attribution License ( http://creativecommons.org/licenses/by-nc/3.0/), which permits non-commercial use, distribution, and reproduction in any medium, provided the original work is properly cited. For commercial re-use, please contact journals.permission@ 123456oup.com