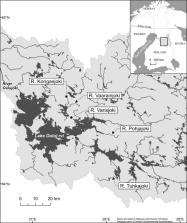 The conservation and management of endangered species requires information on their genetic diversity, relatedness and population structure. The main genetic markers applied for these questions are microsatellites and single nucleotide polymorphisms (SNPs), the latter of which remain the more resource demanding approach in most cases. Here, we compare the performance of two approaches, SNPs obtained by restriction‐site‐associated DNA sequencing (RADseq) and 16 DNA microsatellite loci, for estimating genetic diversity, relatedness and genetic differentiation of three, small, geographically close wild brown trout ( Salmo trutta) populations and a regionally used hatchery strain. The genetic differentiation, quantified as F ST, was similar when measured using 16 microsatellites and 4,876 SNPs. Based on both marker types, each brown trout population represented a distinct gene pool with a low level of interbreeding. Analysis of SNPs identified half‐ and full‐siblings with a higher probability than the analysis based on microsatellites, and SNPs outperformed microsatellites in estimating individual‐level multilocus heterozygosity. Overall, the results indicated that moderately polymorphic microsatellites and SNPs from RADseq agreed on estimates of population genetic structure in moderately diverged, small populations, but RADseq outperformed microsatellites for applications that required individual‐level genotype information, such as quantifying relatedness and individual‐level heterozygosity. The results can be applied to other small populations with low or moderate levels of genetic diversity.

COLONY: a program for parentage and sibship inference from multilocus genotype data.

Jeffrey B. Jones,  Laura B K R Jones,  Jinliang Wang (2010)
Pedigrees, depicting genealogical relationships between individuals, are important in several research areas. Molecular markers allow inference of pedigrees in wild species where relationship information is impossible to collect by observation. Marker data are analysed statistically using methods based on Mendelian inheritance rules. There are numerous computer programs available to conduct pedigree analysis, but most software is inflexible, both in terms of assumptions and data requirements. Most methods only accommodate monogamous diploid species using codominant markers without genotyping error. In addition, most commonly used methods use pairwise comparisons rather than a full-pedigree likelihood approach, which considers the likelihood of the entire pedigree structure and allows the simultaneous inference of parentage and sibship. Here, we describe colony, a computer program implementing full-pedigree likelihood methods to simultaneously infer sibship and parentage among individuals using multilocus genotype data. colony can be used for both diploid and haplodiploid species; it can use dominant and codominant markers, and can accommodate, and estimate, genotyping error at each locus. In addition, colony can carry out these inferences for both monoecious and dioecious species. The program is available as a Microsoft Windows version, which includes a graphical user interface, and a Macintosh version, which uses an R-based interface. © 2009 Blackwell Publishing Ltd.

Developing the science of reintroduction biology.

Sean Maloney,  Doug Armstrong,  Philip Seddon (2007)
With recent increases in the numbers of species reintroduction projects and reintroduction-related publications, there is now a recognizable field of reintroduction biology. Nevertheless, research thus far has been fragmented and ad hoc, rather than an organized attempt to gain reliable knowledge to improve reintroduction success. We reviewed 454 recent (1990-2005) peer-reviewed papers dealing with wildlife reintroductions from 101 journals. Most research has been retrospective, either opportunistic evaluations of techniques or general project summaries, and most inference is gained from post hoc interpretation of monitoring results on a species-by-species basis. Documentation of reintroduction outcomes has improved, however, and the derivation of more general principles via meta-analyses is expected to increase. The fragmentation of the reintroduction literature remains an obstacle. There is scope to improve reintroduction biology by greater application of the hypothetico-deductive method, particularly through the use of modeling approaches and well-designed experiments. Examples of fruitful approaches in reintroduction research include experimental studies to improve outcomes from the release of captive-bred animals, use of simulation modeling to identify factors affecting the viability of reintroduced populations, and the application of spatially explicit models to plan for and evaluate reintroductions. We recommend that researchers contemplating future reintroductions carefully determine a priori the specific goals, overall ecological purpose, and inherent technical and biological limitations of a given reintroduction and that evaluation processes incorporate both experimental and modeling approaches. We suggest that the best progress will be made when multidisciplinary teams of resource managers and scientists work in close collaboration and when results from comparative analyses, experiments, and modeling are combined within and among studies.

M. FRASER,  L. Bernatchez (2001)
Recent years have seen a debate over various methods that could objectively prioritize conservation value below the species level. Most prominent among these has been the evolutionarily significant unit (ESU). We reviewed ESU concepts with the aim of proposing a more unified concept that would reconcile opposing views. Like species concepts, conflicting ESU concepts are all essentially aiming to define the same thing: segments of species whose divergence can be measured or evaluated by putting differential emphasis on the role of evolutionary forces at varied temporal scales. Thus, differences between ESU concepts lie more in the criteria used to define the ESUs themselves rather than in their fundamental essence. We provide a context-based framework for delineating ESUs which circumvents much of this situation. Rather than embroil in a befuddled debate over an optimal criterion, the key to a solution is accepting that differing criteria will work more dynamically than others and can be used alone or in combination depending on the situation. These assertions constitute the impetus behind adaptive evolutionary conservation.

These authors made an equal contribution to this work.