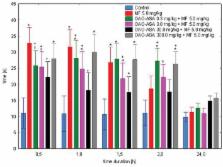 The conjugate 8 was obtained as a result of condensation of 3-hydroxyiminooleanolic acid morfolide (7) and aspirin in dioxane. Analgesic effect of OAO-ASA (8) for the range of doses 0.3–300.0 mg/kg ( p.o.) was performed in mice using a hot-plate test. Anti-inflammatory activity was assessed on carrageenan-induced paw edema in rats for the same range of doses. The conjugate OAO-ASA (8) did not significantly change locomotor activity of mice, therefore sedative properties of the compound should be excluded. The compound 8 proved a simple, proportional, dose-dependent analgesic action and expressed strong anti-inflammatory activity showing a reversed U-shaped, dose-dependent relation with its maximum at 30.0 mg/kg. After its combined administration with morphine (MF, 5.0 mg/kg, s.c.) the lowering of antinociceptive activity was found; however, the interaction with naloxone (NL, 3.0 mg/kg, s.c.) did not affect the antinociceptive effect of OAO-ASA (8), therefore its opioid mechanism of action should be rather excluded. After combined administration with acetylsalicylic acid (ASA, 300.0 mg/kg, p.o.) in hot-plate test, the examined compound 8 enhanced the antinociceptive activity in significant way. It also shows that rather the whole molecule is responsible for the antinociceptive and anti-inflammatory effect of the tested compound 8, however, it cannot be excluded that the summarizing effect is produced by ASA released from the compound 8 and the rest of triterpene derivative. The occurrence of tolerance for triterpenic derivative 8 was not observed, since the analgesic and anti-inflammatory effects after chronic administration of the conjugate OAO-ASA (8) was on the same level as after its single treatment. It seemed that the anti-inflammatory mechanism of action of OAO-ASA (8) is not simple, even its chronic administration lowered both blood concentration of IL-6 and mRNA IL-6 expression. However, the effects of the conjugate OAO-ASA (8) on TNF-α level and mRNA expression were opposite. Moreover, compound 8 did not change unequivocally mRNA TLR1, and TLR3 expression. Concluding, the obtained results regarding the antinociceptive and anti-inflammatory activity of new conjugate of oleanolic acid oxime and acetylsalicylic acid (OAO-ASA 8) are very interesting, but for explanation of its mechanism of action, more detailed studies are necessary.

Stefanie Britsch,  Stefan Endres,  Anne K. Krug … (2002)
The Toll-like receptor (TLR)9 is critical for the recognition of immunostimulatory CpG motifs but may cooperate with other TLRs. We analyzed TLR1-10 mRNA expression by using quantitative real-time PCR in highly purified subsets of human PBMC and determined the sensitivity of these subsets to CpG oligodeoxynucleotides (ODN). TLR1 and TLR6 were expressed in all cell types examined. TLR10 was highly expressed in B cells and weakly expressed in plasmacytoid dendritic cells (PDC). High expression of TLR2 was characteristic for monocytes. PDC and B cells expressed marked levels of TLR7 and TLR9 and were directly sensitive to CpG ODN. In CpG ODN-stimulated PDC and B cells, TLR9 expression rapidly decreased, as opposed to TLR7, which was up-regulated in PDC and decreased in B cells. In monocytes, NK cells, and T cells, TLR7 was absent. Despite low expression of TLR9, monocytes, NK cells, and T cells did not respond to CpG ODN in the absence of PDC but were activated in the presence of PDC. In conclusion, our studies provide evidence that PDC and B cells, but not monocytes, NK cells, or T cells, are primary targets of CpG ODN in peripheral blood. The characteristic expression pattern of TLR1-10 in cellular subsets of human PBMC is consistent with the concept that TLR9 is essential in the recognition of CpG ODN in PDC and B cells. In addition, selective regulation of TLR7 expression in PDC and B cells by CpG ODN revealed TLR7 as a candidate TLR potentially involved in modulating the recognition of CpG motifs.

P Dollé,  E Tzavara,  S Slowe … (1996)
Despite tremendous efforts in the search for safe, efficacious and non-addictive opioids for pain treatment, morphine remains the most valuable painkiller in contemporary medicine. Opioids exert their pharmacological actions through three opioid-receptor classes, mu, delta and kappa, whose genes have been cloned. Genetic approaches are now available to delineate the contribution of each receptor in opioid function in vivo. Here we disrupt the mu-opioid-receptor gene in mice by homologous recombination and find that there are no overt behavioural abnormalities or major compensatory changes within the opioid system in these animals. Investigation of the behavioural effects of morphine reveals that a lack of mu receptors abolishes the analgesic effect of morphine, as well as place-preference activity and physical dependence. We observed no behavioural responses related to delta- or kappa-receptor activation with morphine, although these receptors are present and bind opioid ligands. We conclude that the mu-opioid-receptor gene product is the molecular target of morphine in vivo and that it is a mandatory component of the opioid system for morphine action.