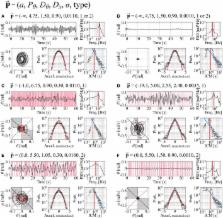 The stabilization of an inverted pendulum on a manually controlled cart (cart-inverted-pendulum; CIP) in an upright position, which is analogous to balancing a stick on a fingertip, is considered in order to investigate how the human central nervous system (CNS) stabilizes unstable dynamics due to mechanical instability and time delays in neural feedback control. We explore the possibility that a type of intermittent time-delayed feedback control, which has been proposed for human postural control during quiet standing, is also a promising strategy for the CIP task and stick balancing on a fingertip. Such a strategy hypothesizes that the CNS exploits transient contracting dynamics along a stable manifold of a saddle-type unstable upright equilibrium of the inverted pendulum in the absence of control by inactivating neural feedback control intermittently for compensating delay-induced instability. To this end, the motions of a CIP stabilized by human subjects were experimentally acquired, and computational models of the system were employed to characterize the experimental behaviors. We first confirmed fat-tailed non-Gaussian temporal fluctuation in the acceleration distribution of the pendulum, as well as the power-law distributions of corrective cart movements for skilled subjects, which was previously reported for stick balancing. We then showed that the experimental behaviors could be better described by the models with an intermittent delayed feedback controller than by those with the conventional continuous delayed feedback controller, suggesting that the human CNS stabilizes the upright posture of the pendulum by utilizing the intermittent delayed feedback-control strategy.

Peter J. Gawthrop,  Martin Lakie,  I. Loram … (2011)
Human motor control is often explained in terms of engineering 'servo' theory. Recently, continuous, optimal control using internal models has emerged as a leading paradigm for voluntary movement. However, these engineering paradigms are designed for high band-width, inflexible, consistent systems whereas human control is low bandwidth and flexible using noisy sensors and actuators. By contrast, engineering intermittent control was designed for bandwidth-limited applications. Our general interest is whether intermittent rather than continuous control is generic to human motor control. Currently, it would be assumed that continuous control is the superior and physiologically natural choice for controlling unstable loads, for example as required for maintaining human balance. Using visuo-manual tracking of an unstable load, we show that control using gentle, intermittent taps is entirely natural and effective. The gentle tapping method resulted in slightly superior position control and velocity minimisation, a reduced feedback time delay, greater robustness to changing actuator gain and equal or greater linearity with respect to the external disturbance. Control was possible with a median contact rate of 0.8±0.3 s(-1). However, when optimising position or velocity regulation, a modal contact rate of 2 s(-1) was observed. This modal rate was consistent with insignificant disturbance-joystick coherence beyond 1-2 Hz in both tapping and continuous contact methods. For this load, these results demonstrate a motor control process of serial ballistic trajectories limited to an optimum rate of 2 s(-1). Consistent with theoretical reasoning, our results suggest that intermittent open loop action is a natural consequence of human physiology.

Stefan Schaal,  Bhairav Mehta (2002)
In recent years, an increasing number of research projects investigated whether the central nervous system employs internal models in motor control. While inverse models in the control loop can be identified more readily in both motor behavior and the firing of single neurons, providing direct evidence for the existence of forward models is more complicated. In this paper, we will discuss such an identification of forward models in the context of the visuomotor control of an unstable dynamic system, the balancing of a pole on a finger. Pole balancing imposes stringent constraints on the biological controller, as it needs to cope with the large delays of visual information processing while keeping the pole at an unstable equilibrium. We hypothesize various model-based and non-model-based control schemes of how visuomotor control can be accomplished in this task, including Smith Predictors, predictors with Kalman filters, tapped-delay line control, and delay-uncompensated control. Behavioral experiments with human participants allow exclusion of most of the hypothesized control schemes. In the end, our data support the existence of a forward model in the sensory preprocessing loop of control. As an important part of our research, we will provide a discussion of when and how forward models can be identified and also the possible pitfalls in the search for forward models in control.