Obstructive Sleep Apnea and Inflammation: Proof of Concept Based on Two Illustrative Cytokines 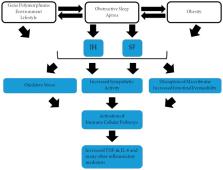 Obstructive sleep apnea syndrome (OSAS) is a markedly prevalent condition across the lifespan, particularly in overweight and obese individuals, which has been associated with an independent risk for neurocognitive, behavioral, and mood problems as well as cardiovascular and metabolic morbidities, ultimately fostering increases in overall mortality rates. In adult patients, excessive daytime sleepiness (EDS) is the most frequent symptom leading to clinical referral for evaluation and treatment, but classic EDS features are less likely to be reported in children, particularly among those with normal body-mass index. The cumulative evidence collected over the last two decades supports a conceptual framework, whereby sleep-disordered breathing in general and more particularly OSAS should be viewed as low-grade chronic inflammatory diseases. Accordingly, it is assumed that a proportion of the morbid phenotypic signature in OSAS is causally explained by underlying inflammatory processes inducing end-organ dysfunction. Here, the published links between OSAS and systemic inflammation will be critically reviewed, with special focus on the pro-inflammatory cytokines tumor necrosis factor α (TNF-α) and interleukin 6 (IL-6), since these constitute classical prototypes of the large spectrum of inflammatory molecules that have been explored in OSAS patients.

Interleukin-6 and its receptors: a highly regulated and dynamic system.

Janina Wolf,  Stefan Rose-John,  Christoph Garbers (2014)
Interleukin-6 (IL-6) is a multifunctional cytokine with well-defined pro- and anti-inflammatory properties. Although only small amounts in the picogram range can be detected in healthy humans, IL-6 expression is highly and transiently up-regulated in nearly all pathophysiological states. IL-6 induces intracellular signaling pathways after binding to its membrane-bound receptor (IL-6R), which is only expressed on hepatocytes and certain subpopulations of leukocytes (classic signaling). Transduction of the signal is mediated by the membrane-bound β-receptor glycoprotein 130 (gp130). In a second pathway, named trans-signaling, IL-6 binds to soluble forms of the IL-6R (sIL-6R), and this agonistic IL-6/sIL-6R complexes can in principle activate all cells due to the uniform expression of gp130. Importantly, several soluble forms of gp130 (sgp130) are found in the human blood, which are considered to be the natural inhibitors of IL-6 trans-signaling. Most pro-inflammatory roles of IL-6 have been attributed to the trans-signaling pathway, whereas anti-inflammatory and regenerative signaling, including the anti-bacterial acute phase response of the liver, is mediated by IL-6 classic signaling. In this simplistic view, only a minority of cell types expresses the IL-6R and is therefore responsive for IL-6 classic signaling, whereas gp130 is ubiquitously expressed throughout the human body. However, several reports point towards a much more complex situation. A plethora of factors, including proteases, cytokines, chemical drugs, and intracellular signaling pathways, are able to modulate the cellular expression of the membrane-bound and soluble forms of IL-6R and gp130. In this review, we summarize current knowledge of regulatory mechanisms that control and regulate the dynamic expression of IL-6 and its two receptors.

Valeriy Poroyko,  Alba Carreras,  Abdelnaby Khalyfa … (2016)
Chronic sleep fragmentation (SF) commonly occurs in human populations, and although it does not involve circadian shifts or sleep deprivation, it markedly alters feeding behaviors ultimately promoting obesity and insulin resistance. These symptoms are known to be related to the host gut microbiota. Mice were exposed to SF for 4 weeks and then allowed to recover for 2 weeks. Taxonomic profiles of fecal microbiota were obtained prospectively, and conventionalization experiments were performed in germ-free mice. Adipose tissue insulin sensitivity and inflammation, as well as circulating measures of inflammation, were assayed. Effect of fecal water on colonic epithelial permeability was also examined. Chronic SF-induced increased food intake and reversible gut microbiota changes characterized by the preferential growth of highly fermentative members of Lachnospiraceae and Ruminococcaceae and a decrease of Lactobacillaceae families. These lead to systemic and visceral white adipose tissue inflammation in addition to altered insulin sensitivity in mice, most likely via enhanced colonic epithelium barrier disruption. Conventionalization of germ-free mice with SF-derived microbiota confirmed these findings. Thus, SF-induced metabolic alterations may be mediated, in part, by concurrent changes in gut microbiota, thereby opening the way for gut microbiome-targeted therapeutics aimed at reducing the major end-organ morbidities of chronic SF.

Rashid Nadeem,  Janos Molnar,  Essam Madbouly … (2013)
Obstructive sleep apnea (OSA) has been linked to and is associated with increased cardiovascular and cerebrovascular morbidity. Ongoing inflammatory responses play an important role in this association. Multiple small size studies addressing the profile of the inflammatory markers in OSA are available therefore we performed a meta-analysis.