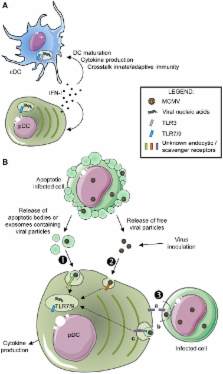 Infection of mice with murine cytomegalovirus (MCMV) recapitulates many physiopathological characteristics of human CMV infection and enables studying the interactions between a virus and its natural host. Dendritic cells (DC) are mononuclear phagocytes linking innate and adaptive immunity which are both necessary for MCMV control. DC are critical for the induction of cellular immunity because they are uniquely efficient for the activation of naïve T cells during their first encounter with a pathogen. DC are equipped with a variety of innate immune recognition receptors (I2R2) allowing them to detect pathogens or infections and to engulf molecules, microorganisms or cellular debris. The combinatorial engagement of I2R2 during infections controls DC maturation and shapes their response in terms of cytokine production, activation of natural killer (NK) cells and functional polarization of T cells. Several DC subsets exist which express different arrays of I2R2 and are specialized in distinct functions. The study of MCMV infection helped deciphering the physiological roles of DC subsets and their molecular regulation. It allowed the identification and first in vivo studies of mouse plasmacytoid DC which produce high level of interferons-α/β early after infection. Despite its ability to infect DC and dampen their functions, MCMV induces very robust, efficient and long-lasting CD8 T cell responses. Their priming may rely on the unique ability of uninfected XCR1 + DC to cross-present engulfed viral antigens and thus to counter MCMV interference with antigen presentation. A balance appears to have been reached during co-evolution, allowing controlled replication of the virus for horizontal spread without pathological consequences for the immunocompetent host. We will discuss the role of the interplay between the virus and DC in setting this balance, and how advancing this knowledge further could help develop better vaccines against other intracellular infectious agents.

Joseph C. Sun,  Joshua Beilke,  Lewis L Lanier (2009)
In an adaptive immune response, naïve T cells proliferate during infection and generate long-lived memory cells that undergo secondary expansion following re-encounter with the same pathogen. Although Natural Killer cells traditionally have been classified as cells of the innate immune system, they share many similarities with cytotoxic T lymphocytes. In a mouse model of cytomegalovirus (MCMV) infection, we demonstrate that, like T cells, NK cells bearing the virus-specific Ly49H receptor proliferate 100-fold in the spleen and 1000-fold in the liver following infection. Following a contraction phase, Ly49H+ NK cells reside in lymphoid and non-lymphoid organs for several months. These self-renewing “memory” NK cells rapidly degranulate and produce cytokines upon reactivation. Adoptive transfer of these NK cells into naïve animals followed by viral challenge results in a robust secondary expansion and protective immunity. These findings reveal novel properties of NK cells previously attributed only to cells of the adaptive immune system.

Scott G Hansen,  Julia Ford,  Matthew S Lewis … (2011)
The AIDS-causing lentiviruses HIV and SIV effectively evade host immunity, and once established, infections with these viruses are only rarely controlled by immunologic mechanisms 1-3 . However, the initial establishment of infection in the first few days after mucosal exposure, prior to viral dissemination and massive replication, may be more vulnerable to immune control 4 . Here, we report that SIV vaccines that include rhesus cytomegalovirus (RhCMV) vectors 5 establish indefinitely persistent, high frequency, SIV-specific effector-memory T cell (TEM) responses at potential sites of SIV replication in rhesus macaques (RM) and stringently control highly pathogenic SIVmac239 infection early after mucosal challenge. Thirteen of 24 RM receiving either RhCMV vectors alone or RhCMV vectors followed by adenovirus 5 (Ad5) vectors (vs. 0 of 9 DNA/Ad5-vaccinated RM) manifested early complete control of SIV (undetectable plasma virus), and in 12/13 of these RM, we observed long-term (≥1 year) protection characterized by: 1) occasional blips of plasma viremia that ultimately waned; 2) predominantly undetectable cell-associated viral load in blood and lymph node mononuclear cells; 3) no depletion of effector site CD4+ memory T cells; 4) no induction or boosting of SIVenv-specific antibodies (Abs); and 5) induction and then loss of T cell responses to an SIV protein (vif) not included in the RhCMV vectors. Protection correlated with the magnitude of the peak SIV-specific CD8+ T cell responses in the vaccine phase, and occurred without anamnestic T cell responses. Remarkably, long-term RhCMV vector-associated SIV control was insensitive to either CD8+ or CD4+ lymphocyte depletion, and at necropsy, cell-associated SIV was only occasionally measurable at the limit of detection with ultrasensitive assays, observations suggesting the possibility of eventual viral clearance. Thus, persistent vectors such as CMV and their associated TEM responses might significantly contribute to an efficacious HIV/AIDS vaccine.

This article was submitted to Virology, a section of the journal Frontiers in Microbiology.