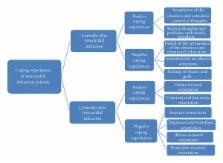 Background. Patients recovering from a myocardial infarction (MI) are faced with a number of serious challenges. Aim. To create a substantive theory on myocardial infarction patients' coping as a continuum. Methods. Grounded theory method was used. Data were collected by using individual interviews. The informants were 28 MI patients. Results. The core category “coping experiences—a pathway towards different coping orientations” includes 2 main categories: “positive and negative coping experiences” (4 months after MI) and “different coping orientations” (12 months after MI). Conclusion. Coping with a myocardial infarction is a long-term dynamic process of dealing with varied emotions and adjustment needs. Coping is threatened, if the patient denies the seriousness of the situation, suffers from depression and emotional exhaustion, or if there are serious problems in the interaction with family members. This study stresses the importance of recognizing the patient's depressive state of mind and the psychological aspects which affect family dynamics. A more family-centered approach involving a posthospital counseling intervention is recommended. Relevance to Clinical Practice. The results of this study can be used in nursing care practice when organizing support interventions for myocardial infarction patients.

The structure and properties of the sense of coherence scale.

A Antonovsky (1993)
Previous work of the author presents a salutogenic theoretical model designed to explain maintenance or improvement of location on a health ease/dis-ease continuum. The model's core construct, the Sense of Coherence (SOC), was consciously formulated in terms which are thought to be applicable crossculturally. The SOC scale which operationalizes the construct is a 29-item semantic differential questionnaire, its design guided by Guttman's facet theory. A 13-item version of the scale has also been used. The purpose of the present paper is to present the extant evidence from studies conducted in 20 countries for the feasibility, reliability and validity of the scale, as well as normative data. In 26 studies using SOC-29 the Cronbach alpha measure of internal consistency has ranged from 0.82 to 0.95. The alphas of 16 studies using SOC-13 range from 0.74 to 0.91. The relatively few test-retest correlations show considerable stability, e.g. 0.54 over a 2-year period among retirees. The systematic procedure used in scale construction and examination of the final product by many colleagues points to a high level of content, face and consensual validity. The few data sets available point to a high level of construct validity. Criterion validity is examined by presenting correlational data between the SOC and measures in four domains: a global orientation to oneself and one's environment (19 r's); stressors (11 r's); health, illness and wellbeing (32 r's); attitudes and behavior (5 r's). The great majority of correlations are statistically significant. All available published normative data on SOC-29 and SOC-13 are presented, data which bear upon validity using the known groups technique.(ABSTRACT TRUNCATED AT 250 WORDS)

Nancy Frasure-Smith,  François Lespérance,  Mario Talajic (1995)
We previously reported that major depression in patients in the hospital after a myocardial infarction (MI) substantially increases the risk of mortality during the first 6 months. We examined the impact of depression over 18 months and present additional evidence concerning potential mechanisms linking depression and mortality. Two-hundred twenty-two patients responded to a modified version of the National Institute of Mental Health Diagnostic Interview Schedule (DIS) for a major depressive episode at approximately 7 days after MI. The Beck Depression Inventory (BDI), which measures depressive symptomatology, was also completed by 218 of the patients. All patients and/or families were contacted at 18 months to determine survival status. Thirty-five patients met the modified DIS criteria for major in-hospital depression after the MI. Sixty-eight had BDI scores > or = 10, indicative of mild to moderate symptoms of depression. There were 21 deaths during the follow-up period, including 19 from cardiac causes. Seven of these deaths occurred among patients who met DIS criteria for depression, and 12 occurred among patients with elevated BDI scores. Multiple logistic regression analyses showed that both the DIS (odds ratio, 3.64; 95% confidence interval [CI], 1.32 to 10.05; P = .012) and elevated BDI scores (odds ratio, 7.82; 95% CI, 2.42 to 25.26; P = .0002) were significantly related to 18-month cardiac mortality. After we controlled for the other significant multivariate predictors of mortality in the data set (previous MI, Killip class, premature ventricular contractions [PVCs] of > or = 10 per hour), the impact of the BDI score remained significant (adjusted odds ratio, 6.64; 95% CI, 1.76 to 25.09; P = .0026). In addition, the interaction of PVCs and BDI score marginally improved the model (P = .094). The interaction showed that deaths were concentrated among depressed patients with PVCs of > or = 10 per hour (odds ratio, 29.1; 95% CI, 6.97 to 122.07; P or = 10 PVCs per hour. This result is compatible with the literature suggesting an arrhythmic mechanism as the link between psychological factors and sudden cardiac death and underscores the importance of developing screening and treatment programs for post-MI depression.

HUMAN EXPERIMENTATION. CODE OF ETHICS OF THE WORLD MEDICAL ASSOCIATION. DECLARATION OF HELSINKI.