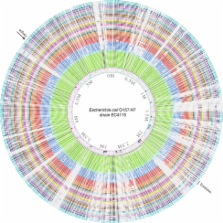 Escherichia coli is an important component of the biosphere and is an ideal model for studies of processes involved in bacterial genome evolution. Sixty-one publically available E. coli and Shigella spp. sequenced genomes are compared, using basic methods to produce phylogenetic and proteomics trees, and to identify the pan- and core genomes of this set of sequenced strains. A hierarchical clustering of variable genes allowed clear separation of the strains into clusters, including known pathotypes; clinically relevant serotypes can also be resolved in this way. In contrast, when in silico MLST was performed, many of the various strains appear jumbled and less well resolved. The predicted pan-genome comprises 15,741 gene families, and only 993 (6%) of the families are represented in every genome, comprising the core genome. The variable or ‘accessory’ genes thus make up more than 90% of the pan-genome and about 80% of a typical genome; some of these variable genes tend to be co-localized on genomic islands. The diversity within the species E. coli, and the overlap in gene content between this and related species, suggests a continuum rather than sharp species borders in this group of Enterobacteriaceae.

H Tettelin,  V Masignani,  M. J. Cieslewicz … (2005)
The development of efficient and inexpensive genome sequencing methods has revolutionized the study of human bacterial pathogens and improved vaccine design. Unfortunately, the sequence of a single genome does not reflect how genetic variability drives pathogenesis within a bacterial species and also limits genome-wide screens for vaccine candidates or for antimicrobial targets. We have generated the genomic sequence of six strains representing the five major disease-causing serotypes of Streptococcus agalactiae, the main cause of neonatal infection in humans. Analysis of these genomes and those available in databases showed that the S. agalactiae species can be described by a pan-genome consisting of a core genome shared by all isolates, accounting for approximately 80% of any single genome, plus a dispensable genome consisting of partially shared and strain-specific genes. Mathematical extrapolation of the data suggests that the gene reservoir available for inclusion in the S. agalactiae pan-genome is vast and that unique genes will continue to be identified even after sequencing hundreds of genomes.

Multilocus sequence typing: a portable approach to the identification of clones within populations of pathogenic microorganisms.

Edward Feil,  D Caugant,  Amy Y Q Zhang … (1998)
Traditional and molecular typing schemes for the characterization of pathogenic microorganisms are poorly portable because they index variation that is difficult to compare among laboratories. To overcome these problems, we propose multilocus sequence typing (MLST), which exploits the unambiguous nature and electronic portability of nucleotide sequence data for the characterization of microorganisms. To evaluate MLST, we determined the sequences of approximately 470-bp fragments from 11 housekeeping genes in a reference set of 107 isolates of Neisseria meningitidis from invasive disease and healthy carriers. For each locus, alleles were assigned arbitrary numbers and dendrograms were constructed from the pairwise differences in multilocus allelic profiles by cluster analysis. The strain associations obtained were consistent with clonal groupings previously determined by multilocus enzyme electrophoresis. A subset of six gene fragments was chosen that retained the resolution and congruence achieved by using all 11 loci. Most isolates from hyper-virulent lineages of serogroups A, B, and C meningococci were identical for all loci or differed from the majority type at only a single locus. MLST using six loci therefore reliably identified the major meningococcal lineages associated with invasive disease. MLST can be applied to almost all bacterial species and other haploid organisms, including those that are difficult to cultivate. The overwhelming advantage of MLST over other molecular typing methods is that sequence data are truly portable between laboratories, permitting one expanding global database per species to be placed on a World-Wide Web site, thus enabling exchange of molecular typing data for global epidemiology via the Internet.