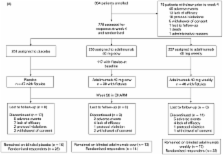 To evaluate the efficacy of adalimumab in the healing of draining fistulas in patients with active Crohn’s disease (CD).

A subgroup of adults with moderate to severely active CD (CD activity index 220–450) for ⩾4 months who had draining fistulas at baseline.

All patients received initial open-label adalimumab induction therapy (80 mg/40 mg at weeks 0/2). At week 4, all patients were randomly assigned to receive double-blind placebo or adalimumab 40 mg every other week or weekly to week 56 (irrespective of fistula status). Patients completing week 56 of therapy were then eligible to enroll in an open-label extension.

Complete fistula healing/closure (assessed at every visit) was defined as no drainage, either spontaneous or with gentle compression.

Of 854 patients enrolled, 117 had draining fistulas at both screening and baseline (70 randomly assigned to adalimumab and 47 to placebo). The mean number of draining fistulas per day was significantly decreased in adalimumab-treated patients compared with placebo-treated patients during the double-blind treatment period. Of all patients with healed fistulas at week 56 (both adalimumab and placebo groups), 90% (28/31) maintained healing following 1 year of open-label adalimumab therapy (observed analysis).

In patients with active CD, adalimumab therapy was more effective than placebo for inducing fistula healing. Complete fistula healing was sustained for up to 2 years by most patients in an open-label extension trial.

Adalimumab for maintenance of clinical response and remission in patients with Crohn's disease: the CHARM trial.

Dan Byczkowski,  Ian Pollack,  S Hanauer … (2006)
This study evaluated the efficacy and safety of adalimumab, a fully human, anti-tumor necrosis factor monoclonal antibody administered subcutaneously, in the maintenance of response and remission in patients with moderate to severe Crohn's disease (CD). Patients received open-label induction therapy with adalimumab 80 mg (week 0) followed by 40 mg (week 2). At week 4, patients were stratified by response (decrease in Crohn's Disease Activity Index > or =70 points from baseline) and randomized to double-blind treatment with placebo, adalimumab 40 mg every other week (eow), or adalimumab 40 mg weekly through week 56. Co-primary end points were the percentages of randomized responders who achieved clinical remission (Crohn's Disease Activity Index score <150) at weeks 26 and 56. The percentage of randomized responders in remission was significantly greater in the adalimumab 40-mg eow and 40-mg weekly groups versus placebo at week 26 (40%, 47%, and 17%, respectively; P < .001) and week 56 (36%, 41%, and 12%, respectively; P < .001). No significant differences in efficacy between adalimumab eow and weekly were observed. More patients receiving placebo discontinued treatment because of an adverse event (13.4%) than those receiving adalimumab (6.9% and 4.7% in the 40-mg eow and 40-mg weekly groups, respectively). Among patients who responded to adalimumab, both adalimumab eow and weekly were significantly more effective than placebo in maintaining remission in moderate to severe CD through 56 weeks. Adalimumab was well-tolerated, with a safety profile consistent with previous experience with the drug.

Infliximab for the treatment of fistulas in patients with Crohn's disease.

▸ Competing interests: Declared (the declaration can be viewed on the Gut website at http://gut.bmj.com/content/vol58/issue7)