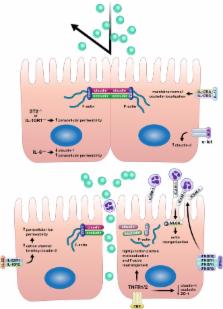 The intestine serves as both our largest single barrier to the external environment and the host of more immune cells than any other location in our bodies. Separating these potential combatants is a single layer of dynamic epithelium composed of heterogeneous epithelial subtypes, each uniquely adapted to carry out a subset of the intestine’s diverse functions. In addition to its obvious role in digestion, the intestinal epithelium is responsible for a wide array of critical tasks, including maintaining barrier integrity, preventing invasion by microbial commensals and pathogens, and modulating the intestinal immune system. Communication between these epithelial cells and resident immune cells is crucial for maintaining homeostasis and coordinating appropriate responses to disease and can occur through cell-to-cell contact or by the release or recognition of soluble mediators. The objective of this review is to highlight recent literature illuminating how cytokines and chemokines, both those made by and acting on the intestinal epithelium, orchestrate many of the diverse functions of the intestinal epithelium and its interactions with immune cells in health and disease. Areas of focus include cytokine control of intestinal epithelial proliferation, cell death, and barrier permeability. In addition, the modulation of epithelial-derived cytokines and chemokines by factors such as interactions with stromal and immune cells, pathogen and commensal exposure, and diet will be discussed.

Allan Mowat, William Agace (2014)
The intestine represents the largest compartment of the immune system. It is continually exposed to antigens and immunomodulatory agents from the diet and the commensal microbiota, and it is the port of entry for many clinically important pathogens. Intestinal immune processes are also increasingly implicated in controlling disease development elsewhere in the body. In this Review, we detail the anatomical and physiological distinctions that are observed in the small and large intestines, and we suggest how these may account for the diversity in the immune apparatus that is seen throughout the intestine. We describe how the distribution of innate, adaptive and innate-like immune cells varies in different segments of the intestine and discuss the environmental factors that may influence this. Finally, we consider the implications of regional immune specialization for inflammatory disease in the intestine.

Jakob von Moltke, Ming Fei Ji, Hong-Erh Liang … (2016)
Parasitic helminths and allergens induce a type 2 immune response leading to profound changes in tissue physiology, including hyperplasia of mucus-secreting goblet cells and smooth muscle hypercontractility. This response, known as 'weep and sweep', requires interleukin (IL)-13 production by tissue-resident group 2 innate lymphoid cells (ILC2s) and recruited type 2 helper T cells (TH2 cells). Experiments in mice and humans have demonstrated requirements for the epithelial cytokines IL-33, thymic stromal lymphopoietin (TSLP) and IL-25 in the activation of ILC2s, but the sources and regulation of these signals remain poorly defined. In the small intestine, the epithelium consists of at least five distinct cellular lineages, including the tuft cell, whose function is unclear. Here we show that tuft cells constitutively express IL-25 to sustain ILC2 homeostasis in the resting lamina propria in mice. After helminth infection, tuft-cell-derived IL-25 further activates ILC2s to secrete IL-13, which acts on epithelial crypt progenitors to promote differentiation of tuft and goblet cells, leading to increased frequencies of both. Tuft cells, ILC2s and epithelial progenitors therefore comprise a response circuit that mediates epithelial remodelling associated with type 2 immunity in the small intestine, and perhaps at other mucosal barriers populated by these cells.

Michael R. Howitt, Sydney Lavoie, Monia Michaud … (2016)
The intestinal epithelium forms an essential barrier between a host and its microbiota. Protozoa and helminths are members of the gut microbiota of mammals, including humans, yet the many ways that gut epithelial cells orchestrate responses to these eukaryotes remain unclear. Here we show that tuft cells, which are taste-chemosensory epithelial cells, accumulate during parasite colonization and infection. Disruption of chemosensory signaling through the loss of TRMP5 abrogates the expansion of tuft cells, goblet cells, eosinophils, and type 2 innate lymphoid cells during parasite colonization. Tuft cells are the primary source of the parasite-induced cytokine interleukin-25, which indirectly induces tuft cell expansion by promoting interleukin-13 production by innate lymphoid cells. Our results identify intestinal tuft cells as critical sentinels in the gut epithelium that promote type 2 immunity in response to intestinal parasites.

Specialty section: This article was submitted to Cytokines and Soluble Mediators in Immunity, a section of the journal Frontiers in Immunology