A tale of two microbes ☆ 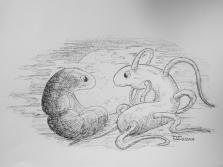 The microbiome and innate immunity.

Christoph Thaiss,  Niv Zmora,  Maayan Levy … (2016)
The intestinal microbiome is a signalling hub that integrates environmental inputs, such as diet, with genetic and immune signals to affect the host's metabolism, immunity and response to infection. The haematopoietic and non-haematopoietic cells of the innate immune system are located strategically at the host-microbiome interface. These cells have the ability to sense microorganisms or their metabolic products and to translate the signals into host physiological responses and the regulation of microbial ecology. Aberrations in the communication between the innate immune system and the gut microbiota might contribute to complex diseases.

Hitesh Deshmukh,  Yuhong Liu,  Ogechukwu R. Menkiti … (2014)
Acquisition of microbes by the neonate, which begins immediately during birth, is influenced by gestational age and mother’s microbiota and modified by exposure to antibiotics 1 . In neonates, prolonged duration of antibiotic therapy is associated with increased risk of sepsis after 4 days of life, known as late-onset sepsis (LOS) 2 , a disorder critically controlled by neutrophils 3 , but a role for the microbiota in regulating neutrophil behavior in the neonate has not been described. We exposed pregnant mouse dams to antibiotics in drinking water to limit transfer of maternal microbes to the neonates. Antibiotic exposure of dams decreased the total number of microbes in the intestine, altered the structure of intestinal microbiota and changed the pattern of microbial colonization. These changes were associated with decreased numbers of circulating and bone marrow neutrophils and granulocyte/macrophage restricted progenitor cells in the bone marrow. Antibiotic-exposure of dams attenuated the postnatal granulocytosis by reducing the number of interleukin (IL) 17-producing cells in intestine and consequent production of granulocyte colony stimulating factor (G-CSF). Relative granulocytopenia contributed to increased susceptibility of antibiotic-exposed neonatal mice to Escherichia coli K1 and Klebsiella pneumoniae sepsis, which could be partially reversed by administration of G-CSF. Restoration of normal microbiota, through TLR4- and MYD88-dependent mechanism, induced accumulation of IL17-producing type 3 innate lymphoid cells (ILC) in the intestine, promoted granulocytosis, and restored the IL17-dependent resistance to sepsis. Specific depletion of ILCs prevented the IL17- and G-CSF-dependent granulocytosis and resistance to sepsis. These data support a role for the intestinal microbiota in regulation of granulocytosis and host resistance to sepsis in the neonates.

Pseudomonas aeruginosa Lifestyle: A Paradigm for Adaptation, Survival, and Persistence

M Fata Moradali,  Shirin Ghods,  Bernd Rehm (2017)
Pseudomonas aeruginosa is an opportunistic pathogen affecting immunocompromised patients. It is known as the leading cause of morbidity and mortality in cystic fibrosis (CF) patients and as one of the leading causes of nosocomial infections. Due to a range of mechanisms for adaptation, survival and resistance to multiple classes of antibiotics, infections by P. aeruginosa strains can be life-threatening and it is emerging worldwide as public health threat. This review highlights the diversity of mechanisms by which P. aeruginosa promotes its survival and persistence in various environments and particularly at different stages of pathogenesis. We will review the importance and complexity of regulatory networks and genotypic-phenotypic variations known as adaptive radiation by which P. aeruginosa adjusts physiological processes for adaptation and survival in response to environmental cues and stresses. Accordingly, we will review the central regulatory role of quorum sensing and signaling systems by nucleotide-based second messengers resulting in different lifestyles of P. aeruginosa. Furthermore, various regulatory proteins will be discussed which form a plethora of controlling systems acting at transcriptional level for timely expression of genes enabling rapid responses to external stimuli and unfavorable conditions. Antibiotic resistance is a natural trait for P. aeruginosa and multiple mechanisms underlying different forms of antibiotic resistance will be discussed here. The importance of each mechanism in conferring resistance to various antipseudomonal antibiotics and their prevalence in clinical strains will be described. The underlying principles for acquiring resistance leading pan-drug resistant strains will be summarized. A future outlook emphasizes the need for collaborative international multidisciplinary efforts to translate current knowledge into strategies to prevent and treat P. aeruginosa infections while reducing the rate of antibiotic resistance and avoiding the spreading of resistant strains.