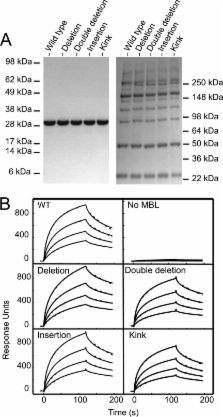 Complement neutralizes invading pathogens, stimulates inflammatory and adaptive immune responses, and targets non- or altered-self structures for clearance. In the classical and lectin activation pathways, it is initiated when complexes composed of separate recognition and activation subcomponents bind to a pathogen surface. Despite its apparent complexity, recognition-mediated activation has evolved independently in three separate protein families, C1q, mannose-binding lectins (MBLs), and serum ficolins. Although unrelated, all have bouquet-like architectures and associate with complement-specific serine proteases: MBLs and ficolins with MBL-associated serine protease-2 (MASP-2) and C1q with C1r and C1s. To examine the structural requirements for complement activation, we have created a number of novel recombinant rat MBLs in which the position and orientation of the MASP-binding sites have been changed. We have also engineered MASP binding into a pulmonary surfactant protein (SP-A), which has the same domain structure and architecture as MBL but lacks any intrinsic complement activity. The data reveal that complement activity is remarkably tolerant to changes in the size and orientation of the collagenous stalks of MBL, implying considerable rotational and conformational flexibility in unbound MBL. Furthermore, novel complement activity is introduced concurrently with MASP binding in SP-A but is uncontrolled and occurs even in the absence of a carbohydrate target. Thus, the active rather than the zymogen state is default in lectin·MASP complexes and must be inhibited through additional regions in circulating MBLs until triggered by pathogen recognition.

Ronald T. Raines,  Matthew D. Shoulders (2008)
Collagen is the most abundant protein in animals. This fibrous, structural protein comprises a right-handed bundle of three parallel, left-handed polyproline II-type helices. Much progress has been made in elucidating the structure of collagen triple helices and the physicochemical basis for their stability. New evidence demonstrates that stereoelectronic effects and preorganization play a key role in that stability. The fibrillar structure of type I collagen-the prototypical collagen fibril-has been revealed in detail. Artificial collagen fibrils that display some properties of natural collagen fibrils are now accessible using chemical synthesis and self-assembly. A rapidly emerging understanding of the mechanical and structural properties of native collagen fibrils will guide further development of artificial collagenous materials for biomedicine and nanotechnology.

Harvey Lodish,  S. Williams,  G Baldini … (1995)
We describe a novel 30-kDa secretory protein, Acrp30 (adipocyte complement-related protein of 30 kDa), that is made exclusively in adipocytes and whose mRNA is induced over 100-fold during adipocyte differentiation. Acrp30 is structurally similar to complement factor C1q and to a hibernation-specific protein isolated from the plasma of Siberian chipmunks; it forms large homo-oligomers that undergo a series of post-translational modifications. Like adipsin, secretion of Acrp30 is enhanced by insulin, and Acrp30 is an abundant serum protein. Acrp30 may be a factor that participates in the delicately balanced system of energy homeostasis involving food intake and carbohydrate and lipid catabolism. Our experiments also further corroborate the existence of an insulin-regulated secretory pathway in adipocytes.

Jonas Emsley,  C.Graham Knight,  Richard W. Farndale … (2000)
We have determined the crystal structure of a complex between the I domain of integrin alpha2beta1 and a triple helical collagen peptide containing a critical GFOGER motif. Three loops on the upper surface of the I domain that coordinate a metal ion also engage the collagen, with a collagen glutamate completing the coordination sphere of the metal. Comparison with the unliganded I domain reveals a change in metal coordination linked to a reorganization of the upper surface that together create a complementary surface for binding collagen. Conformational changes propagate from the upper surface to the opposite pole of the domain, suggesting both a basis for affinity regulation and a pathway for signal transduction. The structural features observed here may represent a general mechanism for integrin-ligand recognition.

Both authors contributed equally to this work.