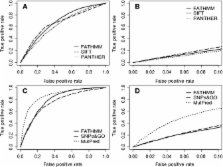 The rate at which nonsynonymous single nucleotide polymorphisms (nsSNPs) are being identified in the human genome is increasing dramatically owing to advances in whole-genome/whole-exome sequencing technologies. Automated methods capable of accurately and reliably distinguishing between pathogenic and functionally neutral nsSNPs are therefore assuming ever-increasing importance. Here, we describe the Functional Analysis Through Hidden Markov Models (FATHMM) software and server: a species-independent method with optional species-specific weightings for the prediction of the functional effects of protein missense variants. Using a model weighted for human mutations, we obtained performance accuracies that outperformed traditional prediction methods (i.e., SIFT, PolyPhen, and PANTHER) on two separate benchmarks. Furthermore, in one benchmark, we achieve performance accuracies that outperform current state-of-the-art prediction methods (i.e., SNPs&GO and MutPred). We demonstrate that FATHMM can be efficiently applied to high-throughput/large-scale human and nonhuman genome sequencing projects with the added benefit of phenotypic outcome associations. To illustrate this, we evaluated nsSNPs in wheat ( Triticum spp.) to identify some of the important genetic variants responsible for the phenotypic differences introduced by intense selection during domestication. A Web-based implementation of FATHMM, including a high-throughput batch facility and a downloadable standalone package, is available at http://fathmm.biocompute.org.uk.

A new generation of homology search tools based on probabilistic inference.

Sean R. Eddy (2009)
Many theoretical advances have been made in applying probabilistic inference methods to improve the power of sequence homology searches, yet the BLAST suite of programs is still the workhorse for most of the field. The main reason for this is practical: BLAST's programs are about 100-fold faster than the fastest competing implementations of probabilistic inference methods. I describe recent work on the HMMER software suite for protein sequence analysis, which implements probabilistic inference using profile hidden Markov models. Our aim in HMMER3 is to achieve BLAST's speed while further improving the power of probabilistic inference based methods. HMMER3 implements a new probabilistic model of local sequence alignment and a new heuristic acceleration algorithm. Combined with efficient vector-parallel implementations on modern processors, these improvements synergize. HMMER3 uses more powerful log-odds likelihood scores (scores summed over alignment uncertainty, rather than scoring a single optimal alignment); it calculates accurate expectation values (E-values) for those scores without simulation using a generalization of Karlin/Altschul theory; it computes posterior distributions over the ensemble of possible alignments and returns posterior probabilities (confidences) in each aligned residue; and it does all this at an overall speed comparable to BLAST. The HMMER project aims to usher in a new generation of more powerful homology search tools based on probabilistic inference methods.