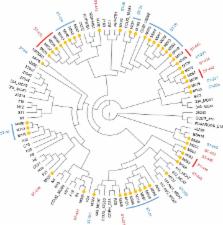 Sputum samples were collected at stable and exacerbation visits from COPD subjects from a single center as part of the COPDMAP consortium. Samples identified as M. catarrhalis positive by qPCR were recultured in liquid cultures grown to extract genomic DNA; underwent Illumina MiSeq and bacterial genome sequences were de novo assembled and Multi Locus Sequence Type (MLST) was determined.

Thirty-five samples were obtained from 18 subjects. These included 13 stable and 22 exacerbation samples. The diversity between samples was very large with 25 different M. catarrhalis MLSTs being identified out of the 35 samples of which 12 MSLTs have not been described previously. Change and persistence of M. catarrhalis strain were observed between stable visits, from stable to exacerbation and vice-a-versa, and between exacerbation visits.

Sputum M. catarrhalis strains exhibit marked diversity within and between COPD subjects. Acquisition of a new strain is common between stable and exacerbation events such that no strain is specifically associated with an exacerbation.

John T Murphy,  Nancy Evans,  Maria B. Grant … (2002)
The role of bacterial pathogens in acute exacerbations of chronic obstructive pulmonary disease is controversial. In older studies, the rates of isolation of bacterial pathogens from sputum were the same during acute exacerbations and during stable disease. However, these studies did not differentiate among strains within a bacterial species and therefore could not detect changes in strains over time. We hypothesized that the acquisition of a new strain of a pathogenic bacterial species is associated with exacerbation of chronic obstructive pulmonary disease. We conducted a prospective study in which clinical information and sputum samples for culture were collected monthly and during exacerbations from 81 outpatients with chronic obstructive pulmonary disease. Molecular typing of sputum isolates of nonencapsulated Haemophilus influenzae, Moraxella catarrhalis, Streptococcus pneumoniae, and Pseudomonas aeruginosa was performed. Over a period of 56 months, the 81 patients made a total of 1975 clinic visits, 374 of which were made during exacerbations (mean, 2.1 per patient per year). On the basis of molecular typing, an exacerbation was diagnosed at 33.0 percent of the clinic visits that involved isolation of a new strain of a bacterial pathogen, as compared with 15.4 percent of visits at which no new strain was isolated (P<0.001; relative risk of an exacerbation, 2.15; 95 percent confidence interval, 1.83 to 2.53). Isolation of a new strain of H. influenzae, M. catarrhalis, or S. pneumoniae was associated with a significantly increased risk of an exacerbation. The association between an exacerbation and the isolation of a new strain of a bacterial pathogen supports the causative role of bacteria in exacerbations of chronic obstructive pulmonary disease. Copyright 2002 Massachusetts Medical Society

Zhang Wang,  Mona Bafadhel,  Koirobi Haldar … (2016)
Increasing evidence suggests that the lung microbiome plays an important role in chronic obstructive pulmonary disease (COPD) severity. However, the dynamics of the lung microbiome during COPD exacerbations and its potential role in disease aetiology remain poorly understood.We completed a longitudinal 16S ribosomal RNA survey of the lung microbiome on 476 sputum samples collected from 87 subjects with COPD at four visits defined as stable state, exacerbation, 2 weeks post-therapy and 6 weeks recovery.Our analysis revealed a dynamic lung microbiota where changes appeared to be associated with exacerbation events and indicative of specific exacerbation phenotypes. Antibiotic and steroid treatments appear to have differential effects on the lung microbiome. We depict a microbial interaction network for the lung microbiome and suggest that perturbation of a few bacterial operational taxonomic units, in particular Haemophilus spp., could greatly impact the overall microbial community structure. Furthermore, several serum and sputum biomarkers, in particular sputum interleukin-8, appear to be highly correlated with the structure and diversity of the microbiome.Our study furthers the understanding of lung microbiome dynamics in COPD patients and highlights its potential as a biomarker, and possibly a target, for future respiratory therapeutics.

L Brauer,  John T Murphy,  Maria B. Grant … (2005)
Moraxella catarrhalis is frequently present in the sputum of adults with chronic obstructive pulmonary disease (COPD). Little is known about the role of M. catarrhalis in this common disease. To elucidate the burden of disease, the dynamics of carriage, and immune responses to M. catarrhalis in COPD. Prospective cohort study of 104 adults with COPD in an outpatient clinic at the Buffalo Veterans Affairs Medical Center. Clinical information, sputum cultures, molecular typing of isolates, and immunoassays to measure antibodies to M. catarrhalis. Over 81 months, 104 patients made 3,009 clinic visits, 560 during exacerbations. Molecular typing identified 120 episodes of acquisition and clearance of M. catarrhalis in 50 patients; 57 (47.5%) of the acquisitions were associated with clinical exacerbations. No instances of simultaneous acquisition of a new strain of another pathogen were observed. The duration of carriage of M. catarrhalis was shorter with exacerbations compared with asymptomatic colonization (median, 31.0 vs. 40.4 days; p = 0.01). Reacquisition of the same strain was rare. The intensity of the serum IgG response was greater after exacerbations than asymptomatic colonization (p = 0.009). Asymptomatic colonization was associated with a greater frequency of a sputum IgA response than exacerbation (p = 0.009). M. catarrhalis likely causes approximately 10% of exacerbations of COPD, accounting for approximately 2 to 4 million episodes annually. The organism is cleared efficiently after a short duration of carriage. Patients develop strain-specific protection after clearance of M. catarrhalis from the respiratory tract.

The full terms of the License are available at http://creativecommons.org/licenses/by/4.0/. The license permits unrestricted use, distribution, and reproduction in any medium, provided the original author and source are credited.