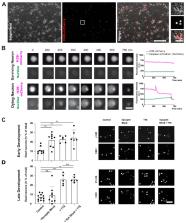 A substantial proportion of neurons undergoes programmed cell death (apoptosis) during early development. This process is attenuated by increased levels of neuronal activity and enhanced by suppression of activity. To uncover whether the mere level of activity or also the temporal structure of electrical activity affects neuronal death rates, we optogenetically controlled spontaneous activity of synaptically-isolated neurons in developing cortical cultures. Our results demonstrate that action potential firing of primary cortical neurons promotes neuronal survival throughout development. Chronic patterned optogenetic stimulation allowed to effectively modulate the firing pattern of single neurons in the absence of synaptic inputs while maintaining stable overall activity levels. Replacing the burst firing pattern with a non-physiological, single pulse pattern significantly increased cell death rates as compared to physiological burst stimulation. Furthermore, physiological burst stimulation led to an elevated peak in intracellular calcium and an increase in the expression level of classical activity-dependent targets but also decreased Bax/BCL-2 expression ratio and reduced caspase 3/7 activity. In summary, these results demonstrate at the single-cell level that the temporal pattern of action potentials is critical for neuronal survival versus cell death fate during cortical development, besides the pro-survival effect of action potential firing per se.

A new mathematical model for relative quantification in real-time RT-PCR.

M. Pfaffl (2001)
Use of the real-time polymerase chain reaction (PCR) to amplify cDNA products reverse transcribed from mRNA is on the way to becoming a routine tool in molecular biology to study low abundance gene expression. Real-time PCR is easy to perform, provides the necessary accuracy and produces reliable as well as rapid quantification results. But accurate quantification of nucleic acids requires a reproducible methodology and an adequate mathematical model for data analysis. This study enters into the particular topics of the relative quantification in real-time RT-PCR of a target gene transcript in comparison to a reference gene transcript. Therefore, a new mathematical model is presented. The relative expression ratio is calculated only from the real-time PCR efficiencies and the crossing point deviation of an unknown sample versus a control. This model needs no calibration curve. Control levels were included in the model to standardise each reaction run with respect to RNA integrity, sample loading and inter-PCR variations. High accuracy and reproducibility (<2.5% variation) were reached in LightCycler PCR using the established mathematical model.

E. Peter Greenberg,  Steven Flavell (2007)
Sensory experience and the resulting synaptic activity within the brain are critical for the proper development of neural circuits. Experience-driven synaptic activity causes membrane depolarization and calcium influx into select neurons within a neural circuit, which in turn trigger a wide variety of cellular changes that alter the synaptic connectivity within the neural circuit. One way in which calcium influx leads to the remodeling of synapses made by neurons is through the activation of new gene transcription. Recent studies have identified many of the signaling pathways that link neuronal activity to transcription, revealing both the transcription factors that mediate this process and the neuronal activity-regulated genes. These studies indicate that neuronal activity regulates a complex program of gene expression involved in many aspects of neuronal development, including dendritic branching, synapse maturation, and synapse elimination. Genetic mutations in several key regulators of activity-dependent transcription give rise to neurological disorders in humans, suggesting that future studies of this gene expression program will likely provide insight into the mechanisms by which the disruption of proper synapse development can give rise to a variety of neurological disorders.

N L BERNASCONI,  Nia Lewis,  F Gambale … (1997)
Proteins of the Bcl-2 family are intracellular membrane-associated proteins that regulate programmed cell death (apoptosis) either positively or negatively by as yet unknown mechanisms. Bax, a pro-apoptotic member of the Bcl-2 family, was shown to form channels in lipid membranes. Bax triggered the release of liposome-encapsulated carboxyfluorescein at both neutral and acidic pH. At physiological pH, release could be blocked by Bcl-2. Bcl-2, in contrast, triggered carboxyfluorescein release at acidic pH only. In planar lipid bilayers, Bax formed pH- and voltage-dependent ion-conducting channels. Thus, the pro-apoptotic effects of Bax may be elicited through an intrinsic pore-forming activity that can be antagonized by Bcl-2.