Leveraging the “mad genius” debate: why we need a neuroscience of creativity and psychopathology 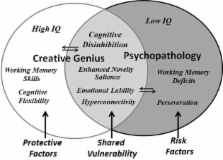 A neuropsychological theory of positive affect and its influence on cognition.

F. Ashby,  Alice Isen,  And Turken (1999)
Positive affect systematically influences performance on many cognitive tasks. A new neuropsychological theory is proposed that accounts for many of these effects by assuming that positive affect is associated with increased brain dopamine levels. The theory predicts or accounts for influences of positive affect on olfaction, the consolidation of long-term (i.e., episodic) memories, working memory, and creative problem solving. For example, the theory assumes that creative problem solving is improved, in part, because increased dopamine release in the anterior cingulate improves cognitive flexibility and facilitates the selection of cognitive perspective.

Hyperactivity and hyperconnectivity of the default network in schizophrenia and in first-degree relatives of persons with schizophrenia.

Joanne Wojcik,  Heidi Thermenos,  John D. E. Gabrieli … (2009)
We examined the status of the neural network mediating the default mode of brain function, which typically exhibits greater activation during rest than during task, in patients in the early phase of schizophrenia and in young first-degree relatives of persons with schizophrenia. During functional MRI, patients, relatives, and controls alternated between rest and performance of working memory (WM) tasks. As expected, controls exhibited task-related suppression of activation in the default network, including medial prefrontal cortex (MPFC) and posterior cingulate cortex/precuneus. Patients and relatives exhibited significantly reduced task-related suppression in MPFC, and these reductions remained after controlling for performance. Increased task-related MPFC suppression correlated with better WM performance in patients and relatives and with less psychopathology in all 3 groups. For WM task performance, patients and relatives had greater activation in right dorsolateral prefrontal cortex (DLPFC) than controls. During rest and task, patients and relatives exhibited abnormally high functional connectivity within the default network. The magnitudes of default network connectivity during rest and task correlated with psychopathology in the patients. Further, during both rest and task, patients exhibited reduced anticorrelations between MPFC and DLPFC, a region that was hyperactivated by patients and relatives during WM performance. Among patients, the magnitude of MPFC task suppression negatively correlated with default connectivity, suggesting an association between the hyperactivation and hyperconnectivity in schizophrenia. Hyperactivation (reduced task-related suppression) of default regions and hyperconnectivity of the default network may contribute to disturbances of thought in schizophrenia and risk for the illness.

Edited by: Zbigniew R. Struzik, The University of Tokyo, Japan