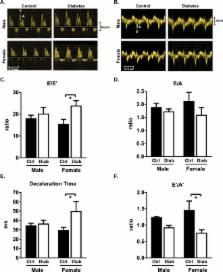 Diabetic cardiomyopathy is a distinct pathology characterized by early emergence of diastolic dysfunction. Increased cardiovascular risk associated with diabetes is more marked for women, but an understanding of the role of diastolic dysfunction in female susceptibility to diabetic cardiomyopathy is lacking. To investigate the sex-specific relationship between systemic diabetic status and in vivo occurrence of diastolic dysfunction, diabetes was induced in male and female mice by streptozotocin (5x daily i.p. 55 mg/kg). Echocardiography was performed at 7 weeks post-diabetes induction, cardiac collagen content assessed by picrosirius red staining, and gene expression measured using qPCR. The extent of diabetes-associated hyperglycemia was more marked in males than females (males: 25.8 ± 1.2 vs 9.1 ± 0.4 mM; females: 13.5 ± 1.5 vs 8.4 ± 0.4 mM, p < 0.05) yet in vivo diastolic dysfunction was evident in female (E/E′ 54% increase, p < 0.05) but not male diabetic mice. Cardiac structural abnormalities (left ventricular wall thinning, collagen deposition) were similar in male and female diabetic mice. Female-specific gene expression changes in glucose metabolic and autophagy-related genes were evident. This study demonstrates that STZ-induced diabetic female mice exhibit a heightened susceptibility to diastolic dysfunction, despite exhibiting a lower extent of hyperglycemia than male mice. These findings highlight the importance of early echocardiographic screening of asymptomatic prediabetic at-risk patients.

Karina Huynh, Bianca C. Bernardo, Julie McMullen … (2014)
Cardiovascular disease is the primary cause of morbidity and mortality among the diabetic population. Both experimental and clinical evidence suggest that diabetic subjects are predisposed to a distinct cardiomyopathy, independent of concomitant macro- and microvascular disorders. 'Diabetic cardiomyopathy' is characterized by early impairments in diastolic function, accompanied by the development of cardiomyocyte hypertrophy, myocardial fibrosis and cardiomyocyte apoptosis. The pathophysiology underlying diabetes-induced cardiac damage is complex and multifactorial, with elevated oxidative stress as a key contributor. We now review the current evidence of molecular disturbances present in the diabetic heart, and their role in the development of diabetes-induced impairments in myocardial function and structure. Our focus incorporates both the contribution of increased reactive oxygen species production and reduced antioxidant defenses to diabetic cardiomyopathy, together with modulation of protein signaling pathways and the emerging role of protein O-GlcNAcylation and miRNA dysregulation in the progression of diabetic heart disease. Lastly, we discuss both conventional and novel therapeutic approaches for the treatment of left ventricular dysfunction in diabetic patients, from inhibition of the renin-angiotensin-aldosterone-system, through recent evidence favoring supplementation of endogenous antioxidants for the treatment of diabetic cardiomyopathy. Novel therapeutic strategies, such as gene therapy targeting the phosphoinositide 3-kinase PI3K(p110α) signaling pathway, and miRNA dysregulation, are also reviewed. Targeting redox stress and protective protein signaling pathways may represent a future strategy for combating the ever-increasing incidence of heart failure in the diabetic population. Copyright © 2014 Elsevier Inc. All rights reserved.

Autosis is a Na+,K+-ATPase-regulated form of cell death triggered by autophagy-inducing peptides, starvation, and hypoxia-ischemia.

Yang Liu, Sanae Shoji-Kawata, Rhea Sumpter … (2013)
A long-standing controversy is whether autophagy is a bona fide cause of mammalian cell death. We used a cell-penetrating autophagy-inducing peptide, Tat-Beclin 1, derived from the autophagy protein Beclin 1, to investigate whether high levels of autophagy result in cell death by autophagy. Here we show that Tat-Beclin 1 induces dose-dependent death that is blocked by pharmacological or genetic inhibition of autophagy, but not of apoptosis or necroptosis. This death, termed "autosis," has unique morphological features, including increased autophagosomes/autolysosomes and nuclear convolution at early stages, and focal swelling of the perinuclear space at late stages. We also observed autotic death in cells during stress conditions, including in a subpopulation of nutrient-starved cells in vitro and in hippocampal neurons of neonatal rats subjected to cerebral hypoxia-ischemia in vivo. A chemical screen of ~5,000 known bioactive compounds revealed that cardiac glycosides, antagonists of Na(+),K(+)-ATPase, inhibit autotic cell death in vitro and in vivo. Furthermore, genetic knockdown of the Na(+),K(+)-ATPase α1 subunit blocks peptide and starvation-induced autosis in vitro. Thus, we have identified a unique form of autophagy-dependent cell death, a Food and Drug Administration-approved class of compounds that inhibit such death, and a crucial role for Na(+),K(+)-ATPase in its regulation. These findings have implications for understanding how cells die during certain stress conditions and how such cell death might be prevented.