The Global Ecology and Epidemiology of West Nile Virus 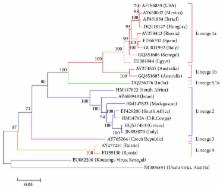 Since its initial isolation in Uganda in 1937 through the present, West Nile virus (WNV) has become an important cause of human and animal disease worldwide. WNV, an enveloped virus of the genus Flavivirus, is naturally maintained in an enzootic cycle between birds and mosquitoes, with occasional epizootic spillover causing disease in humans and horses. The mosquito vectors for WNV are widely distributed worldwide, and the known geographic range of WNV transmission and disease has continued to increase over the past 77 years. While most human infections with WNV are asymptomatic, severe neurological disease may develop resulting in long-term sequelae or death. Surveillance and preventive measures are an ongoing need to reduce the public health impact of WNV in areas with the potential for transmission.

The outbreak of West Nile virus infection in the New York City area in 1999.

Denis Nash,  Farzad Mostashari,  Annie Fine … (2001)
In late August 1999, an unusual cluster of cases of meningoencephalitis associated with muscle weakness was reported to the New York City Department of Health. The initial epidemiologic and environmental investigations suggested an arboviral cause. Active surveillance was implemented to identify patients hospitalized with viral encephalitis and meningitis. Cerebrospinal fluid, serum, and tissue specimens from patients with suspected cases underwent serologic and viral testing for evidence of arboviral infection. Outbreak surveillance identified 59 patients who were hospitalized with West Nile virus infection in the New York City area during August and September of 1999. The median age of these patients was 71 years (range, 5 to 95). The overall attack rate of clinical West Nile virus infection was at least 6.5 cases per million population, and it increased sharply with age. Most of the patients (63 percent) had clinical signs of encephalitis; seven patients died (12 percent). Muscle weakness was documented in 27 percent of the patients and flaccid paralysis in 10 percent; in all of the latter, nerve conduction studies indicated an axonal polyneuropathy in 14 percent. An age of 75 years or older was an independent risk factor for death (relative risk adjusted for the presence or absence of diabetes mellitus, 8.5; 95 percent confidence interval, 1.2 to 59.1), as was the presence of diabetes mellitus (age-adjusted relative risk, 5.1; 95 percent confidence interval, 1.5 to 17.3). This outbreak of West Nile meningoencephalitis in the New York City metropolitan area represents the first time this virus has been detected in the Western Hemisphere. Given the subsequent rapid spread of the virus, physicians along the eastern seaboard of the United States should consider West Nile virus infection in the differential diagnosis of encephalitis and viral meningitis during the summer months, especially in older patients and in those with muscle weakness.

Z Hubalek,  J Halouzka (1999)
West Nile virus causes sporadic cases and outbreaks of human and equine disease in Europe (western Mediterranean and southern Russia in 1962-64, Belarus and Ukraine in the 1970s and 1980s, Romania in 1996-97, Czechland in 1997, and Italy in 1998). Environmental factors, including human activities, that enhance population densities of vector mosquitoes (heavy rains followed by floods, irrigation, higher than usual temperature, or formation of ecologic niches that enable mass breeding of mosquitoes) could increase the incidence of West Nile fever.