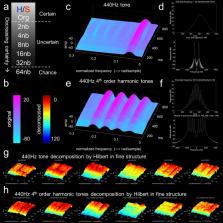 Humans perceive musical sound as a complex phenomenon, which is known to induce an emotional response. The cues used to perceive emotion in music have not been unequivocally elucidated. Here, we sought to identify the attributes of sound that confer an emotion to music and determine if professional musicians have different musical emotion perception than non-musicians. The objective was to determine which sound cues are used to resolve emotional signals. Happy or sad classical music excerpts modified in fine structure or envelope conveying different degrees of emotional certainty were presented. Certainty was determined by identification of the emotional characteristic presented during a forced-choice discrimination task. Participants were categorized as good or poor performers ( n = 32, age 21.16 ± 2.59 SD) and in a separate group as musicians in the first or last year of music education at a conservatory ( n = 32, age 21.97 ± 2.42). We found that temporal fine structure information is essential for correct emotional identification. Non-musicians used less fine structure information to discriminate emotion in music compared with musicians. The present psychophysical experiments revealed what cues are used to resolve emotional signals and how they differ between non-musicians and musically educated individuals.

Music training for the development of auditory skills.

Nina Kraus,  Bharath Chandrasekaran (2010)
The effects of music training in relation to brain plasticity have caused excitement, evident from the popularity of books on this topic among scientists and the general public. Neuroscience research has shown that music training leads to changes throughout the auditory system that prime musicians for listening challenges beyond music processing. This effect of music training suggests that, akin to physical exercise and its impact on body fitness, music is a resource that tones the brain for auditory fitness. Therefore, the role of music in shaping individual development deserves consideration.

Stefan Koelsch (2014)
Music is a universal feature of human societies, partly owing to its power to evoke strong emotions and influence moods. During the past decade, the investigation of the neural correlates of music-evoked emotions has been invaluable for the understanding of human emotion. Functional neuroimaging studies on music and emotion show that music can modulate activity in brain structures that are known to be crucially involved in emotion, such as the amygdala, nucleus accumbens, hypothalamus, hippocampus, insula, cingulate cortex and orbitofrontal cortex. The potential of music to modulate activity in these structures has important implications for the use of music in the treatment of psychiatric and neurological disorders.

M Ekelid,  V V Kamath,  F. Zeng … (1995)
Nearly perfect speech recognition was observed under conditions of greatly reduced spectral information. Temporal envelopes of speech were extracted from broad frequency bands and were used to modulate noises of the same bandwidths. This manipulation preserved temporal envelope cues in each band but restricted the listener to severely degraded information on the distribution of spectral energy. The identification of consonants, vowels, and words in simple sentences improved markedly as the number of bands increased; high speech recognition performance was obtained with only three bands of modulated noise. Thus, the presentation of a dynamic temporal pattern in only a few broad spectral regions is sufficient for the recognition of speech.

This article was submitted to Auditory Cognitive Neuroscience, a section of the journal Frontiers in Neuroscience