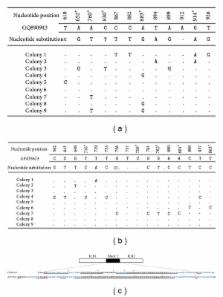 The diversity of MSP1 in both Plasmodium falciparum and P. vivax is presumed be associated to parasite immune evasion. In this study, we assessed genetic diversity of the most variable domain of vaccine candidate N-terminal PvMSP1 (Block 2) in field isolates of Manaus. Forty-seven blood samples the polymorphism of PvMSP1 Block 2 generates four fragment sizes. In twenty-eight of them, sequencing indicated seven haplotypes of PvMSP1 Block 2 circulating among field isolates. Evidence of striking exchanges was observed with two stretches flanking the repeat region and two predicted recombination sites were described. Single nucleotide polymorphisms determined with concurrent infections per patient indicated that nonsynonymous substitutions occurred preferentially in the repeat-rich regions which also were predicted as B-cell epitopes. The comprehensive understanding of the genetic diversity of the promising Block 2 associated with clinical immunity and a reduced risk of infection by Plasmodium vivax would be important for the rationale of malaria vaccine designs.

Francisco J Ayala,  Altaf A Lal,  A. Escalante Del Valle … (1998)
We have studied the genetic polymorphism at 10 Plasmodium falciparum loci that are considered potential targets for specific antimalarial vaccines. The polymorphism is unevenly distributed among the loci; loci encoding proteins expressed on the surface of the sporozoite or the merozoite (AMA-1, CSP, LSA-1, MSP-1, MSP-2, and MSP-3) are more polymorphic than those expressed during the sexual stages or inside the parasite (EBA-175, Pfs25, PF48/45, and RAP-1). Comparison of synonymous and nonsynonymous substitutions indicates that natural selection may account for the polymorphism observed at seven of the 10 loci studied. This inference depends on the assumption that synonymous substitutions are neutral, which we test by analyzing codon bias and G+C content in a set of 92 gene loci. We find evidence for an overall trend towards increasing A+T richness, but no evidence for mutation bias. Although the neutrality of synonymous substitutions is not definitely established, this trend towards an A+T rich genome cannot explain the accumulation of substitutions at least in the case of four genes (AMA-1, CSP, LSA-1, and PF48/45) because the Gleft and right arrow C transversions are more frequent than expected. Moreover, the Tajima test manifests positive natural selection for the MSP-1 and, less strongly, MSP-3 polymorphisms; the McDonald-Kreitman test manifests natural selection at LSA-1 and PF48/45. We conclude that there is definite evidence for positive natural selection in the genes encoding AMA-1, CSP, LSA-1, MSP-1, and Pfs48/45. For four other loci, EBA-175, MSP-2, MSP-3, and RAP-1, the evidence is limited. No evidence for natural selection is found for Pfs25.

C Putaporntip,  S Jongwutiwes,  N Sakihama … (2002)
The organization and allelic recombination of the merozoite surface protein-1 gene of Plasmodium vivax (PvMsp-1), the most widely prevalent human malaria parasite, were evaluated in complete nucleotide sequences of 40 isolates from various geographic areas. Alignment of 31 distinct alleles revealed the mosaic organization of PvMsp-1, consisting of seven interallele conserved blocks flanked by six variable blocks. The variable blocks showed extensive variation in repeats and nonrepeat unique sequences. Numerous recombination sites were distributed throughout PvMsp-1, in both conserved blocks and variable block unique sequences, and the distribution was not uniform. Heterozygosity of PvMsp-1 alleles was higher in Asia (0.953 +/- 0.009) than in Brazil (0.813 +/- 0.047). No identical alleles were shared between Asia and Brazil, whereas all but one variable block nonrepeat sequence found in Brazil occurred in Asia. These observations suggest that P. vivax populations in Asia are ancestral to Brazilian populations, and that PvMsp-1 has heterogeneity in frequency of allelic recombination events. Recurrent origins of new PvMsp-1 alleles by repeated recombination events were supported by a rapid decline in linkage disequilibrium between pairs of synonymous sites with increasing nucleotide distance, with little linkage disequilibrium at a distance of over 3 kb in a P. vivax population from Thailand, evidence for an effectively high recombination rate of the parasite. Meanwhile, highly reduced nucleotide diversity was noted in a region encoding the 19-kDa C-terminal epidermal growth factor-like domain of merozoite surface protein-1, a vaccine candidate.