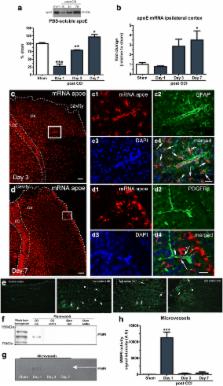 Traumatic Brain Injury (TBI) is a major cause of disability and mortality, to which there is currently no comprehensive treatment. Blood Brain Barrier (BBB) dysfunction is well documented in human TBI patients, yet the molecular mechanisms that underlie this neurovascular unit (NVU) pathology remains unclear. The apolipoprotein-E (apoE) protein has been implicated in controlling BBB integrity in an isoform dependent manner, via suppression of Cyclophilin A (CypA)–Matrix metallopeptidase-9 (MMP-9) signaling cascades, however the contribution of this pathway in TBI-induced BBB permeability is not fully investigated.

We exposed C57Bl/6 mice to controlled cortical impact and assessed NVU and BBB permeability responses up to 21 days post-injury. We pharmacologically probed the role of the CypA-MMP-9 pathway in BBB permeability after TBI using Cyclosporin A (CsA, 20 mg/kg). Finally, as the apoE4 protein is known to be functionally deficient compared to the apoE3 protein, we used humanized APOE mice as a clinically relevant model to study the role of apoE on BBB injury and repair after TBI.

In C57Bl/6 mice there was an inverse relationship between soluble apoE and BBB permeability, such that damaged BBB stabilizes as apoE levels increase in the days following TBI. TBI mice displayed acute pericyte loss, increased MMP-9 production and activity, and reduced tight-junction expression. Treatment with the CypA antagonist CsA in C57Bl/6 mice attenuates MMP-9 responses and enhances BBB repair after injury, demonstrating that MMP-9 plays an important role in the timing of spontaneous BBB repair after TBI. We also show that apoe mRNA is present in both astrocytes and pericytes after TBI.

These data confirm apoE as an important modulator of spontaneous BBB stabilization following TBI, and highlights the APOE4 allele as a risk factor for poor outcome after TBI.

Matthew R Halliday,  Sanket V. Rege,  Qingyi Ma … (2016)
The blood-brain barrier (BBB) limits the entry of neurotoxic blood-derived products and cells into the brain that is required for normal neuronal functioning and information processing. Pericytes maintain the integrity of the BBB and degenerate in Alzheimer's disease (AD). The BBB is damaged in AD, particularly in individuals carrying apolipoprotein E4 (APOE4) gene, which is a major genetic risk factor for late-onset AD. The mechanisms underlying the BBB breakdown in AD remain, however, elusive. Here, we show accelerated pericyte degeneration in AD APOE4 carriers >AD APOE3 carriers >non-AD controls, which correlates with the magnitude of BBB breakdown to immunoglobulin G and fibrin. We also show accumulation of the proinflammatory cytokine cyclophilin A (CypA) and matrix metalloproteinase-9 (MMP-9) in pericytes and endothelial cells in AD (APOE4 >APOE3), previously shown to lead to BBB breakdown in transgenic APOE4 mice. The levels of the apoE lipoprotein receptor, low-density lipoprotein receptor-related protein-1 (LRP1), were similarly reduced in AD APOE4 and APOE3 carriers. Our data suggest that APOE4 leads to accelerated pericyte loss and enhanced activation of LRP1-dependent CypA-MMP-9 BBB-degrading pathway in pericytes and endothelial cells, which can mediate a greater BBB damage in AD APOE4 compared with AD APOE3 carriers.Journal of Cerebral Blood Flow & Metabolism advance online publication, 11 March 2015; doi:10.1038/jcbfm.2015.44.

Quentin Smith,  Paula Grammas,  Lauren Abrey … (2008)
There is a paucity of therapies for most neurological disorders--from rare lysosomal storage diseases to major public health concerns such as stroke and Alzheimer's disease. Advances in the targeting of drugs to the CNS are essential for the future success of neurotherapeutics; however, the delivery of many potentially therapeutic and diagnostic compounds to specific areas of the brain is restricted by the blood-brain barrier, the blood-CSF barrier, or other specialised CNS barriers. These brain barriers are now recognised as a major obstacle to the treatment of most brain disorders. The challenge to deliver therapies to the CNS is formidable, and the solution will require concerted international efforts among academia, government, and industry. At a recent meeting of expert panels, essential and high-priority recommendations to propel brain barrier research forward in six topical areas were developed and these recommendations are presented here.

Synergistic effects of traumatic head injury and apolipoprotein-epsilon 4 in patients with Alzheimer's disease.