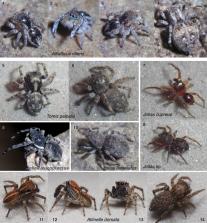 The systematics of sitticine jumping spiders is reviewed, with a focus on the Palearctic and Nearctic regions, in order to revise their generic classification, clarify the species of one region (Canada), and study their chromosomes. A genome-wide molecular phylogeny of 23 sitticine species, using more than 700 loci from the arachnid Ultra-Conserved Element (UCE) probeset, confirms the Neotropical origins of sitticines, whose basal divergence separates the new subtribe Aillutticina (a group of five Neotropical genera) from the subtribe Sitticina (five genera of Eurasia and the Americas). The phylogeny shows that most Eurasian sitticines form a relatively recent and rapid radiation, which we unite into the genus Attulus Simon, 1868, consisting of the subgenera Sitticus Simon, 1901 (seven described species), Attulus (41 described species), and Sittilong Prószyński, 2017 (one species). Five species of Attulus occur natively in North America, presumably through dispersals back from the Eurasian radiation, but an additional three species were more recently introduced from Eurasia. Attus palustris Peckham & Peckham, 1883 is considered to be a full synonym of Euophrys floricola C. L. Koch, 1837 (not a distinct subspecies). Attus sylvestris Emerton, 1891 is removed from synonymy and recognized as a senior synonym of Sitticus magnus Chamberlin & Ivie, 1944. Thus, the five native Attulus in North America are Attulus floricola , A. sylvestris , A. cutleri , A. striatus , and A. finschi . The other sitticines of Canada and the U.S.A. are placed in separate genera, all of which arose from a Neotropical radiation including Jollas Simon, 1901 and Tomis F.O.Pickard-Cambridge, 1901: (1) Attinella Banks, 1905 ( A. dorsata , A. concolor , A. juniperi ), (2) Tomis ( T. welchi ), and (3) Sittisax Prószyński, 2017 ( S. ranieri ). All Neotropical and Caribbean “ Sitticus ” are transferred to either Jollas (12 species total) or Tomis (14 species). Attinella (three species) and Tomis are both removed from synonymy with Sitticus ; the synonymy of Sitticus cabellensis Prószyński, 1971 with Pseudattulus kratochvili Caporiacco, 1947 is restored; Pseudattulus Caporiacco, 1947 is synonymized with Tomis . Six generic names are newly synonymized with Attulus and one with Attinella . Two Neotropical species are described as new, Jollas cupreus sp. nov. and Tomis manabita sp. nov. Forty-six new combinations are established and three are restored. Three species synonymies are restored, one is new, and two are rejected. Across this diversity of species is a striking diversification of chromosome complements, with X-autosome fusions occurring at least four times to produce neo-Y sex chromosome systems (X 1X 2Y and X 1X 2X 3Y), some of which ( Sittisax ranieri and S. saxicola ) are sufficiently derived as to no longer preserve the simple traces of ancestral X material. The correlated distribution of neo-Y and a base autosome number of 28 suggests that neo-Y origins occurred preferentially in lineages with the presence of an extra pair of autosomes.

PHYLUCE is a software package for the analysis of conserved genomic loci.

Brant C Faircloth (2016)
Targeted enrichment of conserved and ultraconserved genomic elements allows universal collection of phylogenomic data from hundreds of species at multiple time scales ( 300 Ma). Prior to downstream inference, data from these types of targeted enrichment studies must undergo preprocessing to assemble contigs from sequence data; identify targeted, enriched loci from the off-target background data; align enriched contigs representing conserved loci to one another; and prepare and manipulate these alignments for subsequent phylogenomic inference. PHYLUCE is an efficient and easy-to-install software package that accomplishes these tasks across hundreds of taxa and thousands of enriched loci.