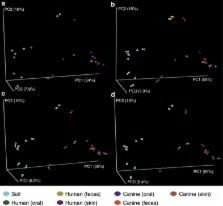 DNA sequencing continues to decrease in cost with the Illumina HiSeq2000 generating up to 600 Gb of paired-end 100 base reads in a ten-day run. Here we present a protocol for community amplicon sequencing on the HiSeq2000 and MiSeq Illumina platforms, and apply that protocol to sequence 24 microbial communities from host-associated and free-living environments. A critical question as more sequencing platforms become available is whether biological conclusions derived on one platform are consistent with what would be derived on a different platform. We show that the protocol developed for these instruments successfully recaptures known biological results, and additionally that biological conclusions are consistent across sequencing platforms (the HiSeq2000 versus the MiSeq) and across the sequenced regions of amplicons.

A renaissance for the pioneering 16S rRNA gene.

Susannah Tringe,  Philip Hugenholtz (2008)
Culture-independent molecular surveys using the 16S rRNA gene have become a mainstay for characterizing microbial community structure over the past quarter century. More recently this approach has been overshadowed by metagenomics, which provides a global overview of a community's functional potential rather than just an inventory of its inhabitants. However, the pioneering 16S rRNA gene is making a comeback in its own right thanks to a number of methodological advancements including higher resolution (more sequences), analysis of multiple related samples (e.g. spatial and temporal series) and improved metadata, and use of metadata. The standard conclusion that microbial ecosystems are remarkably complex and diverse is now being replaced by detailed insights into microbial ecology and evolution based only on this one historically important marker gene.

Justin Kuczynski,  Zongzhi Liu,  Catherine A. Lozupone … (2010)
The development of high-throughput sequencing methods allows for the characterization of microbial communities in a wide range of environments on an unprecedented scale. However, insight into microbial community composition is limited by our ability to detect patterns in this flood of sequences. Here we compare the performance of 51 analysis techniques using real and simulated bacterial 16S rRNA pyrosequencing datasets containing either clustered samples or samples arrayed across environmental gradients. We find that many diversity patterns are evident with severely undersampled communities, and that methods vary widely in their ability to detect gradients and clusters. Chi-squared distances and Pearson correlation distances perform especially well for detecting gradients, while Gower and Canberra distances perform especially well for detecting clusters. These results also provide a basis for understanding tradeoffs between number of samples and depth of coverage, tradeoffs which are important to consider when designing studies to characterize microbial communities.

Hua-Fang Sheng,  Hong-Wei Zhou,  Jin-Xia Qin … (2011)
Pyrosequencing of 16S rRNA (16S) variable tags has become the most popular method for assessing microbial diversity, but the method remains costly for the evaluation of large numbers of environmental samples with high sequencing depths. We developed a barcoded Illumina paired-end (PE) sequencing (BIPES) method that sequences each 16S V6 tag from both ends on the Illumina HiSeq 2000, and the PE reads are then overlapped to obtain the V6 tag. The average accuracy of Illumina single-end (SE) reads was only 97.9%, which decreased from ∼99.9% at the start of the read to less than 85% at the end of the read; nevertheless, overlapping of the PE reads significantly increased the sequencing accuracy to 99.65% by verifying the 3' end of each SE in which the sequencing quality was degraded. After the removal of tags with two or more mismatches within the medial 40-70 bases of the reads and of tags with any primer errors, the overall base sequencing accuracy of the BIPES reads was further increased to 99.93%. The BIPES reads reflected the amounts of the various tags in the initial template, but long tags and high GC tags were underestimated. The BIPES method yields 20-50 times more 16S V6 tags than does pyrosequencing in a single-flow cell run, and each of the BIPES reads costs less than 1/40 of a pyrosequencing read. As a laborsaving and cost-effective method, BIPES can be routinely used to analyze the microbial ecology of both environmental and human microbiomes.