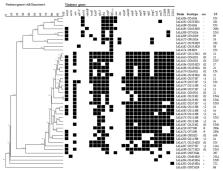 Since no recent data characterizing Shiga toxin-producing E. coli (STEC) from human infections in Brazil are available, the present study aimed to investigate serotypes, stx genotypes, and accessory virulence genes, and also to perform pulsed-field gel electrophoresis (PFGE) and multi-locus sequence typing (MLST) of 43 STEC strains recovered from 2007 to 2017. Twenty-one distinct serotypes were found, with serotype O111:H8 being the most common. However, serotypes less frequently reported in human diseases were also found and included a hybrid STEC/ETEC O100:H25 clone. The majority of the strains carried stx1a as the sole stx genotype and were positive for the eae gene. Regarding the occurrence of 28 additional virulence genes associated with plasmids and pathogenicity islands, a diversity of profiles was found especially among the eae-harboring strains, which had combinations of markers composed of up to 12 distinct genes. Although PFGE analysis demonstrated genetic diversity between serotypes such as O157:H7, O111:H8, O26:H11, O118:H16, and O123:H2, high genetic relatedness was found for strains of serotypes O24:H4 and O145:H34. MLST allowed the identification of 17 distinct sequence types (STs) with ST 16 and 21 being the most common ones. Thirty-five percent of the strains studied were not typeable by the currently used MLST approach, suggesting new STs. Although STEC O111:H8 remains the leading serotype in Brazil, a diversity of other serotypes, some carrying virulence genes and belonging to STs incriminated as causing severe disease, were found in this study. Further studies are needed to determine whether they have any epidemiological relevance.

James Paton,  Adrienne W Paton (1998)
Since their initial recognition 20 years ago, Shiga toxin-producing Escherichia coli (STEC) strains have emerged as an important cause of serious human gastrointestinal disease, which may result in life-threatening complications such as hemolytic-uremic syndrome. Food-borne outbreaks of STEC disease appear to be increasing and, when mass-produced and mass-distributed foods are concerned, can involve large numbers of people. Development of therapeutic and preventative strategies to combat STEC disease requires a thorough understanding of the mechanisms by which STEC organisms colonize the human intestinal tract and cause local and systemic pathological changes. While our knowledge remains incomplete, recent studies have improved our understanding of these processes, particularly the complex interaction between Shiga toxins and host cells, which is central to the pathogenesis of STEC disease. In addition, several putative accessory virulence factors have been identified and partly characterized. The capacity to limit the scale and severity of STEC disease is also dependent upon rapid and sensitive diagnostic procedures for analysis of human samples and suspect vehicles. The increased application of advanced molecular technologies in clinical laboratories has significantly improved our capacity to diagnose STEC infection early in the course of disease and to detect low levels of environmental contamination. This, in turn, has created a potential window of opportunity for future therapeutic intervention.

Associations between virulence factors of Shiga toxin-producing Escherichia coli and disease in humans.

Chris C. Wilson,  Timothy Johnson,  F Boerlin-Petzold … (1999)
Associations between known or putative virulence factors of Shiga toxin-producing Escherichia coli and disease in humans were investigated. Univariate analysis and multivariate logistic regression analysis of a set of 237 isolates from 118 serotypes showed significant associations between the presence of genes for intimin (eae) and Shiga toxin 2 (stx2) and isolates from serotypes reported in humans. Similar associations were found with isolates from serotypes reported in hemorrhagic colitis and hemolytic-uremic syndrome. The enterohemorrhagic E. coli (EHEC) hemolysin gene was significantly associated with isolates from serotypes found in severe diseases in univariate analysis but not in multivariate logistic regression models. A strong association between the intimin and EHEC-hemolysin genes may explain the lack of statistical significance of EHEC hemolysin in these multivariate models, but a true lack of biological significance of the hemolysin in humans or in disease cannot be excluded. This result warrants further investigations of this topic. Multivariate analysis revealed an interaction between the eae and stx2 genes, thus supporting the hypothesis of the synergism between the adhesin intimin and Shiga toxin 2. A strong statistical association was observed between the stx2 gene and severity of disease for a set of 112 human isolates from eight major serotypes. A comparison of 77 isolates of bovine origin and 91 human isolates belonging to six major serotypes showed significant associations of the genes for Shiga toxin 1 and EspP protease with bovine isolates and an increased adherence on HEp-2 cell cultures for human isolates, particularly from diarrheic patients and healthy persons.

M. Griffin,  R. M. Hoekstra,  Evangeline G Sowers … (2005)
Shiga toxin-producing Escherichia coli (STEC) O157:H7 is a well-recognized cause of bloody diarrhea and hemolytic-uremic syndrome (HUS). Non-O157 STEC contribute to this burden of illness but have been underrecognized as a result of diagnostic limitations and inadequate surveillance. Between 1983 and 2002, 43 state public health laboratories submitted 940 human non-O157 STEC isolates from persons with sporadic illnesses to the Centers for Diseases Control and Prevention reference laboratory for confirmation and serotyping. The most common serogroups were O26 (22%), O111 (16%), O103 (12%), O121 (8%), O45 (7%), and O145 (5%). Non-O157 STEC infections were most frequent during the summer and among young persons (median age, 12 years; interquartile range, 3-37 years). Virulence gene profiles were as follows: 61% stx(1) but not stx(2); 22% stx(2) but not stx(1); 17% both stx(1) and stx(2); 84% intimin (eae); and 86% enterohemolysin (E-hly). stx(2) was strongly associated with an increased risk of HUS, and eae was strongly associated with an increased risk of bloody diarrhea. STEC O111 accounted for most cases of HUS and was also the cause of 3 of 7 non-O157 STEC outbreaks reported in the United States. Non-O157 STEC can cause severe illness that is comparable to the illness caused by STEC O157. Strains that produce Shiga toxin 2 are much more likely to cause HUS than are those that produce Shiga toxin 1 alone. Improving surveillance will more fully elucidate the incidence and pathological spectrum of these emerging agents. These efforts require increased clinical suspicion, improved clinical laboratory isolation, and continued serotyping of isolates in public health laboratories.