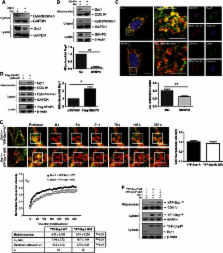 Global increases in small ubiquitin-like modifier (SUMO)-2/3 conjugation are a neuroprotective response to severe stress but the mechanisms and specific target proteins that determine cell survival have not been identified. Here, we demonstrate that the SUMO-2/3-specific protease SENP3 is degraded during oxygen/glucose deprivation (OGD), an in vitro model of ischaemia, via a pathway involving the unfolded protein response (UPR) kinase PERK and the lysosomal enzyme cathepsin B. A key target for SENP3-mediated deSUMOylation is the GTPase Drp1, which plays a major role in regulating mitochondrial fission. We show that depletion of SENP3 prolongs Drp1 SUMOylation, which suppresses Drp1-mediated cytochrome c release and caspase-mediated cell death. SENP3 levels recover following reoxygenation after OGD allowing deSUMOylation of Drp1, which facilitates Drp1 localization at mitochondria and promotes fragmentation and cytochrome c release. RNAi knockdown of SENP3 protects cells from reoxygenation-induced cell death via a mechanism that requires Drp1 SUMOylation. Thus, we identify a novel adaptive pathway to extreme cell stress in which dynamic changes in SENP3 stability and regulation of Drp1 SUMOylation are crucial determinants of cell fate.

G Kroemer,  P Boya (2008)
Mitochondrial outer membrane permeabilization (MOMP) constitutes one of the major checkpoint(s) of apoptotic and necrotic cell death. Recently, the permeabilization of yet another organelle, the lysosome, has been shown to initiate a cell death pathway, in specific circumstances. Lysosomal membrane permeabilization (LMP) causes the release of cathepsins and other hydrolases from the lysosomal lumen to the cytosol. LMP is induced by a plethora of distinct stimuli including reactive oxygen species, lysosomotropic compounds with detergent activity, as well as some endogenous cell death effectors such as Bax. LMP is a potentially lethal event because the ectopic presence of lysosomal proteases in the cytosol causes digestion of vital proteins and the activation of additional hydrolases including caspases. This latter process is usually mediated indirectly, through a cascade in which LMP causes the proteolytic activation of Bid (which is cleaved by the two lysosomal cathepsins B and D), which then induces MOMP, resulting in cytochrome c release and apoptosome-dependent caspase activation. However, massive LMP often results in cell death without caspase activation; this cell death may adopt a subapoptotic or necrotic appearance. The regulation of LMP is perturbed in cancer cells, suggesting that specific strategies for LMP induction might lead to novel therapeutic avenues.

Naotada Ishihara,  Masatoshi Nomura,  Akihiro Jofuku … (2009)
Mitochondrial morphology is dynamically controlled by a balance between fusion and fission. The physiological importance of mitochondrial fission in vertebrates is less clearly defined than that of mitochondrial fusion. Here we show that mice lacking the mitochondrial fission GTPase Drp1 have developmental abnormalities, particularly in the forebrain, and die after embryonic day 12.5. Neural cell-specific (NS) Drp1(-/-) mice die shortly after birth as a result of brain hypoplasia with apoptosis. Primary culture of NS-Drp1(-/-) mouse forebrain showed a decreased number of neurites and defective synapse formation, thought to be due to aggregated mitochondria that failed to distribute properly within the cell processes. These defects were reflected by abnormal forebrain development and highlight the importance of Drp1-dependent mitochondrial fission within highly polarized cells such as neurons. Moreover, Drp1(-/-) murine embryonic fibroblasts and embryonic stem cells revealed that Drp1 is required for a normal rate of cytochrome c release and caspase activation during apoptosis, although mitochondrial outer membrane permeabilization, as examined by the release of Smac/Diablo and Tim8a, may occur independently of Drp1 activity.

This article is licensed under a Creative Commons Attribution-Noncommercial-No Derivative Works 3.0 Unported Licence. To view a copy of this licence visit http://creativecommons.org/licenses/by-nc-nd/3.0/.