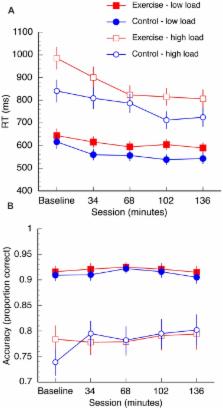 Successful goal directed behavior relies on a human attention system that is flexible and able to adapt to different conditions of physiological stress. However, the effects of physical activity on multiple aspects of selective attention and whether these effects are mediated by aerobic capacity, remains unclear. The aim of the present study was to investigate the effects of a prolonged bout of physical activity on visual search performance and perceptual distraction. Two groups of participants completed a hybrid visual search flanker/response competition task in an initial baseline session and then at 17-min intervals over a 2 h 16 min test period. Participants assigned to the exercise group engaged in steady-state aerobic exercise between completing blocks of the visual task, whereas participants assigned to the control group rested in between blocks. The key result was a correlation between individual differences in aerobic capacity and visual search performance, such that those individuals that were more fit performed the search task more quickly. Critically, this relationship only emerged in the exercise group after the physical activity had begun. The relationship was not present in either group at baseline and never emerged in the control group during the test period, suggesting that under these task demands, aerobic capacity may be an important determinant of visual search performance under physical stress. The results enhance current understanding about the relationship between exercise and cognition, and also inform current models of selective attention.

I. Glenn Cohen,  Edward McAuley,  Kirk I Erickson … (2004)
Cardiovascular fitness is thought to offset declines in cognitive performance, but little is known about the cortical mechanisms that underlie these changes in humans. Research using animal models shows that aerobic training increases cortical capillary supplies, the number of synaptic connections, and the development of new neurons. The end result is a brain that is more efficient, plastic, and adaptive, which translates into better performance in aging animals. Here, in two separate experiments, we demonstrate for the first time to our knowledge, in humans that increases in cardiovascular fitness results in increased functioning of key aspects of the attentional network of the brain during a cognitively challenging task. Specifically, highly fit (Study 1) or aerobically trained (Study 2) persons show greater task-related activity in regions of the prefrontal and parietal cortices that are involved in spatial selection and inhibitory functioning, when compared with low-fit (Study 1) or nonaerobic control (Study 2) participants. Additionally, in both studies there exist groupwise differences in activation of the anterior cingulate cortex, which is thought to monitor for conflict in the attentional system, and signal the need for adaptation in the attentional network. These data suggest that increased cardiovascular fitness can affect improvements in the plasticity of the aging human brain, and may serve to reduce both biological and cognitive senescence in humans.

The effects of acute exercise on cognitive performance: a meta-analysis.

Y.K. Chang,  J.D. Labban,  J.I. Gapin … (2012)
There is a substantial body of literature related to the effects of a single session of exercise on cognitive performance. The premise underlying this research is that physiological changes in response to exercise have implications for cognitive function. This literature has been reviewed both narratively and meta-analytically and, although the research findings are mixed, researchers have generally concluded that there is a small positive effect. The purpose of this meta-analysis was to provide an updated comprehensive analysis of the extant literature on acute exercise and cognitive performance and to explore the effects of moderators that have implications for mechanisms of the effects. Searches of electronic databases and examinations of reference lists from relevant studies resulted in 79 studies meeting inclusion criteria. Consistent with past findings, analyses indicated that the overall effect was positive and small (g=0.097 n=1034). Positive and small effects were also found in all three acute exercise paradigms: during exercise (g=0.101; 95% confidence interval [CI]; 0.041-0.160), immediately following exercise (g=0.108; 95% CI; 0.069-0.147), and after a delay (g=0.103; 95% CI; 0.035-0.170). Examination of potential moderators indicated that exercise duration, exercise intensity, type of cognitive performance assessed, and participant fitness were significant moderators. In conclusion, the effects of acute exercise on cognitive performance are generally small; however, larger effects are possible for particular cognitive outcomes and when specific exercise parameters are used. Copyright © 2012 Elsevier B.V. All rights reserved.

This article was submitted to Cognition, a section of the journal Frontiers in Psychology.