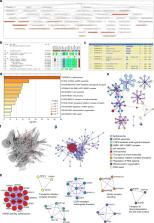 A critical component in the interpretation of systems-level studies is the inference of enriched biological pathways and protein complexes contained within OMICs datasets. Successful analysis requires the integration of a broad set of current biological databases and the application of a robust analytical pipeline to produce readily interpretable results. Metascape is a web-based portal designed to provide a comprehensive gene list annotation and analysis resource for experimental biologists. In terms of design features, Metascape combines functional enrichment, interactome analysis, gene annotation, and membership search to leverage over 40 independent knowledgebases within one integrated portal. Additionally, it facilitates comparative analyses of datasets across multiple independent and orthogonal experiments. Metascape provides a significantly simplified user experience through a one-click Express Analysis interface to generate interpretable outputs. Taken together, Metascape is an effective and efficient tool for experimental biologists to comprehensively analyze and interpret OMICs-based studies in the big data era.

With the increasing obtainability of multi-OMICs data comes the need for easy to use data analysis tools. Here, the authors introduce Metascape, a biologist-oriented portal that provides a gene list annotation, enrichment and interactome resource and enables integrated analysis of multi-OMICs datasets.

Gene Ontology: tool for the unification of biology

Andrew Chatr-aryamontri, Rose Oughtred, Lorrie Boucher … (2016)
The Biological General Repository for Interaction Datasets (BioGRID: https://thebiogrid.org) is an open access database dedicated to the annotation and archival of protein, genetic and chemical interactions for all major model organism species and humans. As of September 2016 (build 3.4.140), the BioGRID contains 1 072 173 genetic and protein interactions, and 38 559 post-translational modifications, as manually annotated from 48 114 publications. This dataset represents interaction records for 66 model organisms and represents a 30% increase compared to the previous 2015 BioGRID update. BioGRID curates the biomedical literature for major model organism species, including humans, with a recent emphasis on central biological processes and specific human diseases. To facilitate network-based approaches to drug discovery, BioGRID now incorporates 27 501 chemical–protein interactions for human drug targets, as drawn from the DrugBank database. A new dynamic interaction network viewer allows the easy navigation and filtering of all genetic and protein interaction data, as well as for bioactive compounds and their established targets. BioGRID data are directly downloadable without restriction in a variety of standardized formats and are freely distributed through partner model organism databases and meta-databases.

Andreas Ruepp, Brigitte Waegele, Martin Lechner … (2010)
CORUM is a database that provides a manually curated repository of experimentally characterized protein complexes from mammalian organisms, mainly human (64%), mouse (16%) and rat (12%). Protein complexes are key molecular entities that integrate multiple gene products to perform cellular functions. The new CORUM 2.0 release encompasses 2837 protein complexes offering the largest and most comprehensive publicly available dataset of mammalian protein complexes. The CORUM dataset is built from 3198 different genes, representing ∼16% of the protein coding genes in humans. Each protein complex is described by a protein complex name, subunit composition, function as well as the literature reference that characterizes the respective protein complex. Recent developments include mapping of functional annotation to Gene Ontology terms as well as cross-references to Entrez Gene identifiers. In addition, a ‘Phylogenetic Conservation’ analysis tool was implemented that analyses the potential occurrence of orthologous protein complex subunits in mammals and other selected groups of organisms. This allows one to predict the occurrence of protein complexes in different phylogenetic groups. CORUM is freely accessible at (http://mips.helmholtz-muenchen.de/genre/proj/corum/index.html).