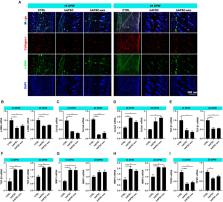 Adult wound healing often results in fibrotic scarring that is caused by myofibroblast aggregation. Human amniotic fluid stem cells (hAFSCs) exhibit significantly anti-fibrotic scarring properties during wound healing. However, it is little known whether hAFSCs directly or indirectly (paracrine) contribute to this process. Using the full-thickness skin-wounded rats, we investigated the therapeutic potential of hAFSC-derived exosomes (hAFSC-exo). Our results showed that hAFSC-exo accelerated the wound healing rate and improved the regeneration of hair follicles, nerves, and vessels, as well as increased proliferation of cutaneous cells and the natural distribution of collagen during wound healing. Additionally, hAFSC-exo suppressed the excessive aggregation of myofibroblasts and the extracellular matrix. We identified several miRNAs, including let-7-5p, miR-22-3p, miR-27a-3p, miR-21-5p, and miR-23a-3p, that were presented in hAFSC-exo. The functional analysis demonstrated that these hAFSC-exo-miRNAs contribute to the inhibition of the transforming growth factor-β (TGF-β) signaling pathway by targeting the TGF-β receptor type I (TGF-βR1) and TGF-β receptor type II (TGF-βR2). The reduction of TGF-βR1 and TGF-βR2 expression induced by hAFSC-exo was also confirmed in the healing tissue. Finally, using mimics of miRNAs, we found that hAFSC-exo-miRNAs were essential for myofibroblast suppression during the TGF-β1-induced human dermal fibroblast-to-myofibroblast transition in vitro. In summary, this study is the first to show that exosomal miRNAs used in hAFSC-based therapy inhibit myofibroblast differentiation. Our study suggests that hAFSC-exo may represent a strategic tool for suppressing fibrotic scarring during wound healing.

Thirumalai Ramalingam,  Thomas Wynn (2012)
Fibrosis is a pathological feature of most chronic inflammatory diseases. Fibrosis, or scarring, is defined by the accumulation of excess extracellular matrix components. If highly progressive, the fibrotic process eventually leads to organ malfunction and death. Fibrosis affects nearly every tissue in the body. Here we discuss how key components of the innate and adaptive immune response contribute to the pathogenesis of fibrosis. We also describe how cell-intrinsic changes in important structural cells can perpetuate the fibrotic response by regulating the differentiation, recruitment, proliferation and activation of extracellular matrix-producing myofibroblasts. Finally, we highlight some of the key mechanisms and pathways of fibrosis that are being targeted as potential therapies for a variety of important human diseases.

Elena Batrakova (corresponding) ,  Myung Soo Kim (2015)
Exosomes offer distinct advantages that uniquely position them as highly effective drug carriers. Comprised of cellular membranes with multiple adhesive proteins on their surface, exosomes are known to specialize in cell-cell communications and provide an exclusive approach for the delivery of various therapeutic agents to target cells. In addition, exosomes can be amended through their parental cells to express a targeting moiety on their surface, or supplemented with desired biological activity. Development and validation of exosome-based drug delivery systems are the focus of this review. Different techniques of exosome isolation, characterization, drug loading, and applications in experimental disease models and clinic are discussed. Exosome-based drug formulations may be applied to a wide variety of disorders such as cancer, various infectious, cardiovascular, and neurodegenerative disorders. Overall, exosomes combine benefits of both synthetic nanocarriers and cell-mediated drug delivery systems while avoiding their limitations.

Jieyuan Zhang,  Junjie Guan,  Xin Niu … (2015)
Background Human induced pluripotent stem cell-derived mesenchymal stem cells (hiPSC-MSCs) have emerged as a promising alternative for stem cell transplantation therapy. Exosomes derived from mesenchymal stem cells (MSC-Exos) can play important roles in repairing injured tissues. However, to date, no reports have demonstrated the use of hiPSC-MSC-Exos in cutaneous wound healing, and little is known regarding their underlying mechanisms in tissue repair. Methods hiPSC-MSC-Exos were injected subcutaneously around wound sites in a rat model and the efficacy of hiPSC-MSC-Exos was assessed by measuring wound closure areas, by histological and immunofluorescence examinations. We also evaluated the in vitro effects of hiPSC-MSC-Exos on both the proliferation and migration of human dermal fibroblasts and human umbilical vein endothelial cells (HUVECs) by cell-counting and scratch assays, respectively. The effects of exosomes on fibroblast collagen and elastin secretion were studied in enzyme-linked immunosorbent assays and quantitative reverse-transcriptase–polymerase chain reaction (qRT-PCR). In vitro capillary network formation was determined in tube-formation assays. Results Transplanting hiPSC-MSC-Exos to wound sites resulted in accelerated re-epithelialization, reduced scar widths, and the promotion of collagen maturity. Moreover, hiPSC-MSC-Exos not only promoted the generation of newly formed vessels, but also accelerated their maturation in wound sites. We found that hiPSC-MSC-Exos stimulated the proliferation and migration of human dermal fibroblasts and HUVECs in a dose-dependent manner in vitro. Similarly, Type I, III collagen and elastin secretion and mRNA expression by fibroblasts and tube formation by HUVECs were also increased with increasing hiPSC-MSC-Exos concentrations. Conclusions Our findings suggest that hiPSC-MSC-Exos can facilitate cutaneous wound healing by promoting collagen synthesis and angiogenesis. These data provide the first evidence for the potential of hiPSC-MSC-Exos in treating cutaneous wounds.

This article was submitted to Stem Cell Research, a section of the journal Frontiers in Cell and Developmental Biology