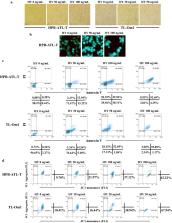 Adult T-cell leukemia (ATL) is an aggressive neoplasm caused by human T-cell leukemia virus type 1 (HTLV-1). ATL carries a poor prognosis due to chemotherapy resistance. Thus, it is urgent to develop new treatment strategies. Hypericin (HY) is a new-type of photosensitizer in the context of photodynamic therapy (PDT) due to its excellent photosensitizing properties and anti-tumor activities.

Our results revealed that hypericin-PDT is highly effective against ATL cells by induction of apoptosis and suppression of viral transcription. These studies highlight the promising use of hypericin-PDT as a targeted therapy for ATL.

Kuan-Teh Jeang,  Masao Matsuoka (2007)
It has been 30 years since a 'new' leukaemia termed adult T-cell leukaemia (ATL) was described in Japan, and more than 25 years since the isolation of the retrovirus, human T-cell leukaemia virus type 1 (HTLV-1), that causes this disease. We discuss HTLV-1 infectivity and how the HTLV-1 Tax oncoprotein initiates transformation by creating a cellular environment favouring aneuploidy and clastogenic DNA damage. We also explore the contribution of a newly discovered protein and RNA on the HTLV-1 minus strand, HTLV-1 basic leucine zipper factor (HBZ), to the maintenance of virus-induced leukaemia.

Atae Utsunomiya,  Lee Ratner,  Ali Bazarbachi … (2009)
Adult T-cell leukemia-lymphoma (ATL) is a distinct peripheral T-lymphocytic malignancy associated with a retrovirus designated human T-cell lymphotropic virus type I (HTLV-1). The diversity in clinical features and prognosis of patients with this disease has led to its subclassification into the following four categories: acute, lymphoma, chronic, and smoldering types. The chronic and smoldering subtypes are considered indolent and are usually managed with watchful waiting until disease progression, analogous to the management of some patients with chronic lymphoid leukemia (CLL) or other indolent histology lymphomas. Patients with aggressive ATL generally have a poor prognosis because of multidrug resistance of malignant cells, a large tumor burden with multiorgan failure, hypercalcemia, and/or frequent infectious complications as a result of a profound T-cell immunodeficiency. Under the sponsorship of the 13th International Conference on Human Retrovirology: HTLV, a group of ATL researchers joined to form a consensus statement based on established data to define prognostic factors, clinical subclassifications, and treatment strategies. A set of response criteria specific for ATL reflecting a combination of those for lymphoma and CLL was proposed. Clinical subclassification is useful but is limited because of the diverse prognosis among each subtype. Molecular abnormalities within the host genome, such as tumor suppressor genes, may account for these diversities. A treatment strategy based on the clinical subclassification and prognostic factors is suggested, including watchful waiting approach, chemotherapy, antiviral therapy, allogeneic hematopoietic stem-cell transplantation (alloHSCT), and targeted therapies.

C.A. Robertson,  D. Hawkins Evans,  H Abrahamse (2009)
Photodynamic therapy (PDT) has been used for many years, but it is only now becoming widely accepted and utilized. Originally it was developed as a tumor therapy and some of its most successful applications are for non-malignant diseases. This article provides a broad review of different parameters used and mechanisms instituted in PDT such as photosensitizers (PS), photochemistry and photophysics, cellular localization, cellular signaling, cell metabolism and modes of cell death that operate on a cellular level, as well as photosensitizer pharmacokinetics, biodistribution, tumor localization and modes of tumor destruction. These specific cellular mechanisms are most commonly applied in PDT and for the most part are often researched and exploited. If the combination of these specific parameters and mechanisms can be optimized within PDT it could possibly be used as a suitable alternative for the treatment and management of specific cancers.